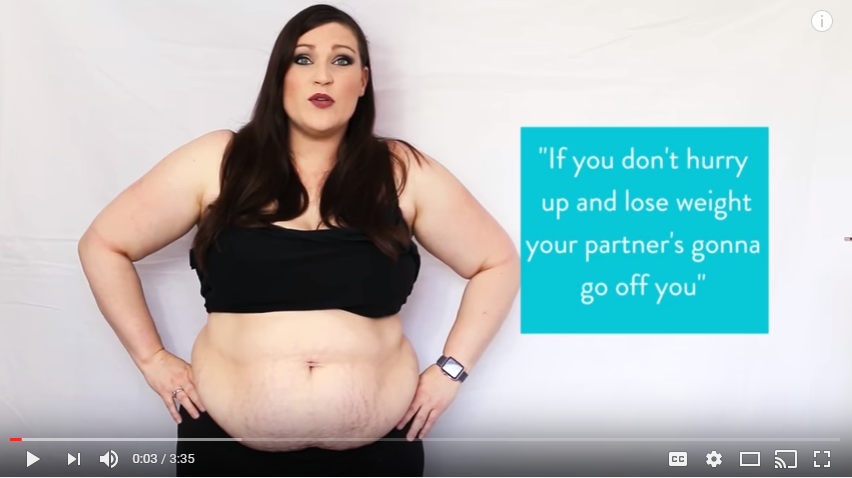 Mums who loathe their post-birth bodies are sparking a body confidence crisis in their own children, a study has found.

Seven in ten mums say their young children have repeated back negative phrases about their appearance after hearing their mothers say it.

Four in ten children have complained ‘I feel fat’ along with 41 per cent who repeated ‘I don’t like my tummy.’

A further third have asked to go on a diet while 14 per cent have cried ‘I don’t like my body’.

And one in ten kids even criticised their size of their bottom, after learning the words from their mother.

The study from parenting site ChannelMum.com found the average new mum spends £1,871 attempting to get her pre-pregnancy figure back – but almost three quarters (72%) don’t achieve it and are far less body confident after giving birth.

Siobhan Freegard, founder of ChannelMum.com said: “Bodyshaming in all forms is wrong, but criticising a woman for looking a little different when she’s grown a whole new human is ridiculous.

“Giving birth is the most extreme thing a woman’s body can do, so of course the shape is going to change.

“Having a post-birth body is something to be celebrated, not shamed.

“Of course it’s good to be fit and healthy, but we shouldn’t be so obsessed with perfection that we raise a generation of children with body hang-ups.

“Having a bit of a mum tum or some stretchmarks isn’t shameful, it’s a badge of honour for what your body has gone through. They are the markings of a mother.”

The study of 2,000 mums found that while 70 per cent say they are grateful for what their body has achieved, just seven per cent feel more body confident after having a child.

Instead, 42 per cent claim their new figure has ‘negatively’ affected their sex life with only one in 20 mums feeling sexier with their changed shape.

Worryingly, 71 per cent of mums have received negative comments about their post baby body, with family followed by strangers the most common culprits.

And 13 per cent were even shamed by their GP or health visitor.

The crisis is so bad that seven per cent of mums admit to dieting while pregnant and a further 16 per cent consider it, despite the proven health risks.

And after giving birth, one in 40 resort to expensive body shaping surgery – but a huge 35 per cent say they’d have it if they could afford it.

A further 68 per cent try anti-stretchmark treatments, while over half (52%) join a diet club and 13 per cent even hire a pricey personal trainer.

To overcome the crisis, three quarters of mums are now calling for advertisers to use more realistic mum body images in commercials, such as ditching images of new mums with taut stomachs on the beach in a bikini with a newborn baby.

Two thirds (62%) are pushing for celebrities to be more honest, with those claiming to ‘snap back into shape’ after birth to reveal they have actually followed an intensive diet and exercise regime.

Almost two thirds (64%) of mums say they now follow celebrity mums who have been open about their post-birth bodies on social media, with Giovanna Fletcher, Louise Pentland, Rebekah Vardy and Charlotte Louise Taylor voted the most inspiring

One in 14 mums has already shared a ‘Post Baby Body’ selfie on social media and two in five pregnant mums are planning to post their own images.

Eighty-five per cent mums want post-birth bodies to be celebrated whatever the shape, with a third of claiming to be proud of their stretchmarks – dubbed ‘tiger stripes’, while 21 per cent celebrate their C-section scar.

Surprisingly, 23 per cent liked their curvier ‘mum tum’ stomach but the favourite post-birth body part is breasts, loved by a third of mums (32%).

The most common PBB body shaming insults are:>[? You still look pregnant (31% of mums have been told this)

I thought breastfeeding made you lose weight (24%)