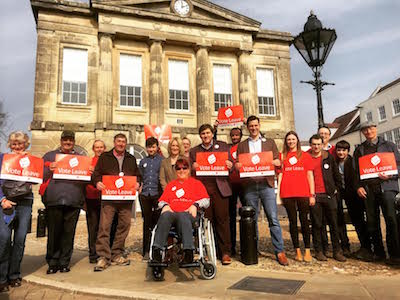 Campaigners came together outside the Andover Guildhall on Saturday to take the message to the people of North Hampshire that voting leave in the upcoming EU referendum is the sensible, safest and most secure choice.

Their message is simple; a leave vote in the upcoming referendum would mean a new UK-EU deal based on free trade and friendly cooperation. It would end the supremacy of EU law and regain control for Britain. We would stop sending £350 million every week to Brussels and instead spend it on our priorities, like education, the NHS and transport

North West Hampshire MP, Kit Malthouse said: “This is a once in a lifetime opportunity and our last chance to have a say on staying in or leaving the EU. There will be lots of misinformation and scare tactics used during the campaign, but I would urge people to focus on two simple issues: First, who do you want to be in charge; someone you elect and can sack, or someone who is appointed without your consent? Second, do you think the EU, which has been so disastrous for the Greeks and Spanish, is the best place to build and agile, dynamic economy for the 21st Century?”

Campaign organiser Phil North said: “For me it comes down to this very simple argument. Do we want to be governed by our own elected representatives in our own sovereign parliament or do we want to contract that out to EU officials? A vote to leave does not mean we would stop trading with our European partners but staying in prevents us from signing free trade agreements with any country outside the Political Union. Instead let’s open our arms to the world. On June 23rd let’s vote for our democracy and cement our internationalist future. Let’s vote leave.”

County Councillor Tim Rolt said: “We were taken into the EEC on a completely false and deceitful prospectus in 1973, having been promised a ‘Common Market’. A self-serving elite has given away powers that were not theirs to give away in the first place; now is the time to take these powers back by leaving the EU, and for Britain to take her place in the world as a proud, self-governing and independent country once again.”