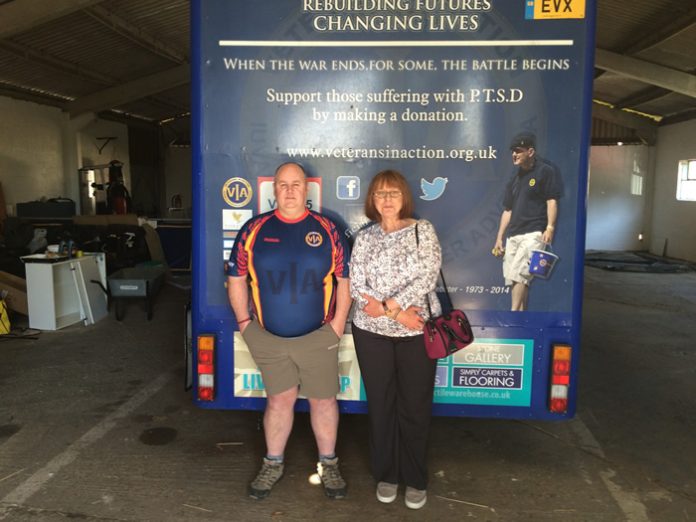 Sue told Andover & Villages, “This is a charity Peter and I are both very interested in as we are both ex-military.

“When we served in the armed forces, the government was fully committed to the military covenant and personnel received appropriate resettlement training and advice before discharge. This does not happen today when it is even more vital due to the number of injured personnel and those with PSTD due to the conflicts in which they have served as part of the British government’s deployment of the armed forces.

“Veterans in Action rely 100% on donations and receives no grants. They currently have to pay £20,000 a year to rent the premises they use, which are currently being adapted to provide a much needed gym and project room. They could benefit from the donation of professional gym equipment and, more immediately, donations to help cover the cost of food during their 4000 mile walk starting on 4th May at 10am from the Guildhall in Andover.

“I believe this charity is unique in the UK in helping ex forces personnel with PTSD – from talking to them I can see they use a unique approach to rebuilding lives by offering opportunities to rebuild self-esteem through expeditions and other projects. For many ex forces personnel it can be up to 14 years after leaving the armed forces that they seek help for PTSD, which the government and Ministry of Defence still refuse to fully accept.

“These are people who were prepared to sacrifice their lives for the security of our way of life and for our country. We owe them a great debt of gratitude and I was horrified to learn of the number of marriage break ups, suicides and homelessness cases amongst ex forces personnel with PTSD. As with mental health generally in this country, PTSD is not being taken seriously enough – it is a ‘hidden’ problem unlike seeing an amputee returning from war. If elected, honouring the military covenant would be high up my agenda.”