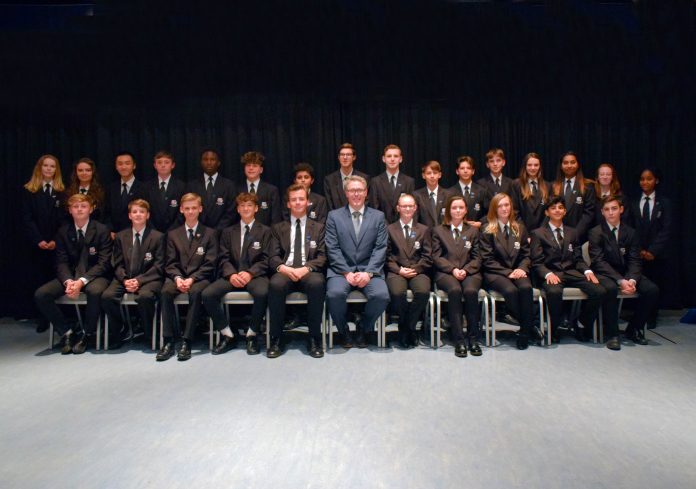 Winton Community Academy’s new prefect team were introduced to a group of proud parents recently. The event was to issue students with their new blazers and ties and to reveal the much anticipated news of the names of the head boy and head girl. Last year was the first year the academy had prefects for some time and the team were well led by our excellent outgoing head girl Alice Stone and head boy Tom Cox.

Now in its second year the quality of applications and interviews was truly inspiring. Nearly half of the year group applied for a position on the prefect team with only 30 being offered interviews and ultimately 20 students offered the position of prefect.

“I am delighted with the new prefect team and look forward to meeting them in our weekly meeting to discuss ways in which we can continue to improve the Academy for the young people we serve. Both parent voice and student voice are really important at Winton and regularly meeting with the prefects is one way we can ensure the voice of the students is heard and acted upon.” Nathan Thomas, Principal.

“I am honoured to have been given this role at Winton, I am really proud to be a member of the Academy and I am really looking forward to leading the student voice and supporting Mr Thomas and the Winton staff as we move forward through Year 11 together.” Jaky Liu, Head boy

With such a strong field choosing a head girl and head boy was a tricky task for the Principal and interviewing team, however in an outstanding field of young people there were two students who epitomised what Winton Community Academy is all about. Jaky Liu our new head boy and Megan Smith our new head girl are hard working, commitment, intelligent and passionate young people. They have represented the Academy in youth speaks, in sports teams and school shows and as well as having an exemplary academic record they are excellent examples of the polite, courteous and positive young people the Academy is full of.

This year for the first time, Winton has created three additionally roles of House Captains. This year’s house captains will be Charlotte Ollington (Darwin), Harry Grover (Brunel) and Lauren Trotman (Newton). They will work with the Heads of House to support charity events, sports days and house competitions throughout the year. Winton has a strong House system which supports all students with both their pastoral needs and making them feel part of the wider families and communities within the Academy.