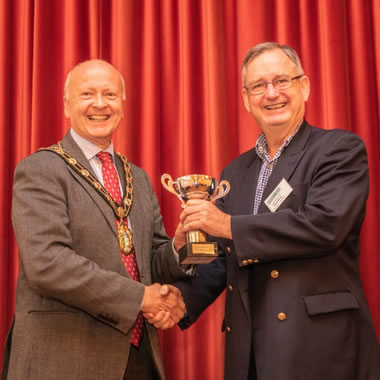 Andover Photographic Club was fortunate to have the Worshipful Mayor of Test Valley, Cllr Martin Hatley, and Mayoress, Mrs Joanne Hatley as guests at the club’s weekly Thursday evening meeting earlier this month.

The evening also included the presentation of the Sandy Wilson Award. The late Sandy Wilson was a stalwart of Andover Photographic Club encouraging and mentoring other local photographers. Sandy made a bequest to the club, which is now used to finance an award in his honour.

In keeping with his commitment to the club, the award is given to the person voted by members to be the most inspiring that season. This year the award was won by Club Chairman Steve Govan and Cllr Hatley presented the trophy. Steve Govan thanked the Mayor for the award and spoke of how honoured he was to have received the trophy and to have it presented by him.

Cllr Hatley spoke of how pleased he and his wife were to have been invited to the club’s weekly meeting and how inspired he had been by the evening’s presentation and by the quality of images displayed by members at their recent biennial exhibition held at the Museum of the Iron Age Andover. Members expressed their thanks to the Mayor and Mayoress for their good company and honouring the club with their attendance.

Richard James, Vice-Chair of the Club says, “‘The aim of the Andover Photographic Club is to provide a friendly, stimulating and inclusive environment to encourage photographers of all levels of ability to enjoy what they do and to support them in acquiring new skills and meeting new friends”.