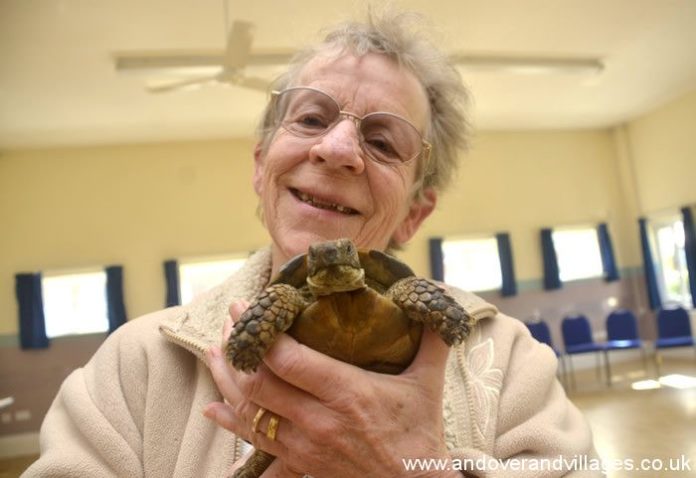 Anton Vets hosted a Tortoise Wake Up Party on Saturday 28th March 2015, at Burghclere Down Community Centre in Andover.

Vet, John Chitty, was ably assisted by staff from Anton Vets conducting the post-hibernation checks to the creep of tortoises.

1. A tortoise is a turtle, but a turtle isn’t a tortoise.

A turtle is any shelled reptile belonging to the order Chelonii. The term “tortoise” is more specific, referring to terrestrial turtles. (Of course, there’s always an exception. In this case, the land-dwelling box turtle.) Tortoises are usually herbivorous and can’t swim.

2. A group of tortoises is called a creep.

But you won’t see a creep very often. Tortoises are solitary roamers. Some mother tortoises are protective of their nests, but they don’t care for their young after they hatch.

During sieges, soldiers would get in testudo formation, named after the Latin word for tortoise. The men formed rows and held shields in front or above them to completely shelter the unit.

Darwin is said to have collected and named Harriet back in 1835. She was sent to England and eventually wound up at Australia Zoo, founded by Steve Irwin’s parents. She finally passed on in 2006, the same year as the Crocodile Hunter’s fatal encounter with a stingray.

5. Tortoises have an exoskeleton AND an endoskeleton.

The shell has three main parts: the top carapace, the bottom plastron, and the bridge that fuses these pieces together. You can’t see them, but every tortoise has ribs, a collar bone, and a spine inside its shell.

6. The scales on the carapace are called scutes.

Made of the same keratin found in fingernails and hooves, scutes protect the bony plates of the shell from injury and infection. The growth rings around scutes can be counted to determine the approximate age of wild tortoises.

7. The lighter the shell, the warmer the origin.

Tortoises from hot places tend to have lighter-coloured shells than tortoises from cooler areas. The light tan sulcata originates from the southern part of the Sahara Desert.

8. They can’t swim, but tortoises can hold their breath for a long time.

They’re extremely tolerant of carbon dioxide. Tortoises have to empty their lungs before they can go into their shells. You’ll often hear them exhale when they’re startled and decide to hide.

9. Tortoise shells are sensitive to touch.

Shells have nerve endings, so tortoises can feel every rub, pet, or scratch … and sometimes they love it.

10. Sulcatas are one of the most popular pet tortoises — and one of the biggest.

Sulcatas are the third largest tortoise species in the world, behind the Galapagos and Aldabra giant tortoise. They can live more than 100 years and weigh up to 200 pounds.