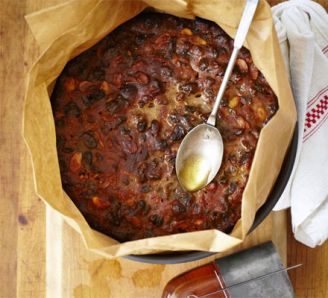 There are a couple of traditions surrounding the Christmas cake.

The first is the ‘Stir Up’ which traditionally takes place on the last Sunday before Advent (now more associated with the Christmas pudding). Traditionally the cake is made in November.

The second is the ‘feeding of the cake’ when alcohol, usually brandy, sherry or whisky is added in small amounts through small holes in the cake (the cake during this time is kept in an airtight container) and the final tradition which is not so common now but was in Victorian times, it was thought to be unlucky to cut the cake before dawn on Christmas Eve.

There are traditionally two types of Christmas cake, the classic fruit cake layered in marzipan and icing or the Scottish Dundee cake. With no marzipan or icing but instead made with whisky. It tends to be much lighter with less dried fruit and made with currants, cherries, raisins and candied peel.

150ml brandy, Sherry, whisky or rum, plus extra for feeding

Put the dried fruit, zests and juice, alcohol, butter and sugar in a large pan set over a medium heat. Bring to the boil, then lower the heat and simmer for 5 mins. Tip the fruit mixture into a large bowl and leave to cool for 30 mins.

Add the remaining ingredients to the fruit mixture and stir well, making sure there are no pockets of flour. Tip into your prepared tin, level the top with a spatula and bake in the centre of the oven for 2 hrs. Remove the cake from the oven, poke holes in it with a skewer and spoon over 2 tbsp of your chosen alcohol. Leave the cake to cool completely in the tin.

To store, peel off the baking parchment, then wrap well in cling film. Feed the cake with 1-2 tbsp alcohol every fortnight, until you ice it. Don’t feed the cake for the final week to give the surface a chance to dry before icing.