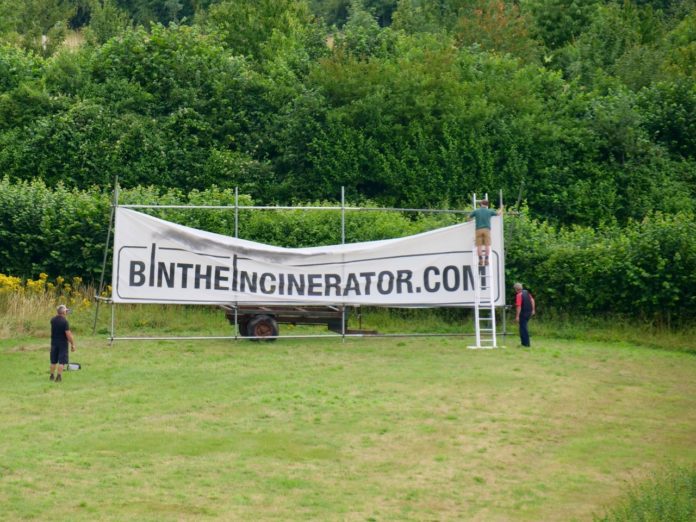 Test Valley Borough Council (TVBC) have threatened legal action against landowners who have ‘Bin The Incinerator’ campaign boards on their fields.

Threats to landowners were sent out as Cllr Phil North is set to declare a ‘climate emergency’ in Test Valley within the next Full Council meeting.

Many have criticised the silencing of the campaign by Test Valley Borough Council as the government commit to ‘net zero’ emissions in the UK by 2050.

It’s reported that hundreds of people visited the website of the campaign after the instalment of the banners along the busy A303.

Andy Jolliffe, Founder of ‘STOP the Harewood Incinerator’ group and spokesperson for ‘Keep Test Valley Beautiful’ Facebook page told Andover and Villages, “It’s quite amazing how quickly TVBC have reacted to this – normally they seem to take months to deal with any planning issue or other complaints if it gets dealt with at all.  To my mind, they have been incredibly heavy-handed, in one email I saw they went as far as issuing a formal legal caution, even though the sender admitted they weren’t sure if they were sending it to the right person!

“The original understanding was that as the banner was not permanent, and was on a moveable trailer, that no planning permission was required.  However, Test Valley Borough Council have since advised that this understanding is incorrect.”

He added, “The Keep Test Valley Beautiful campaign group are understandably very disappointed that the signs have come down. Most users of the A303 still have no idea that there is a proposal for a huge industrial building the same height and length as Battersea Power station with chimneys just under 100 meters tall and visible from over 30 miles away from being planned right next to the Barton Stacey exit.”

Many are concerned with the impact on the goal of ‘net zero’ emissions by 2050, while others are concerned about the wildlife around the planned site.

A council spokesperson said: “The council launched an investigation, as we are legally obliged to do after we received a complaint that the advertisements had been erected without the required consent. As we determined that they did not have the appropriate consent we asked the landowners to remove them and this has now been done.

“The content of the advertisement itself had no bearing whatsoever on the council’s approach in this case and in no way reflects its views on the proposals for the waste-to-energy facility, or climate change.

“The proposal to develop a new waste-to-energy facility at Harewood is a Nationally Significant Infrastructure Project and any application will be determined by the Planning Inspectorate, not Test Valley Borough Council. However, the council will be consulted on the proposal, as will the local community.”

You can find more information on the incinerator on their website by visiting http://bintheincinerator.co.uk/

Gabriel Ingram - Monday, January 14, 2019
Reports of an overturned lorry on Winchester Rd, Three Maids Roundabout, B3420. The lorry overturned at around 9 am today (January 14th) All lanes are blocked...