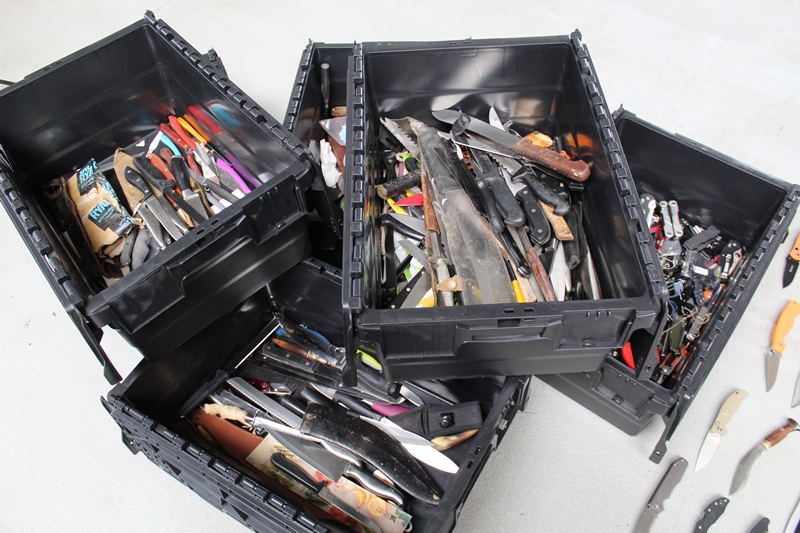 Our Op Sceptre knife crime prevention campaign and amnesty has been hailed a success after a total of 430 knives were handed into police stations across Wiltshire in just two weeks.

During the Op Sceptre fortnight, which ran from Monday 17 – Sunday 30 September, we featured case studies from people whose lives have been affected by knife crime; from the victim of knife crime to the police officer who had to deal with a serious stabbing, along with us highlighting warrants carried out during the two weeks where a number of weapons and drugs were seized.  There were also a number of people arrested with investigations ongoing.

As part of the conclusion to the campaign, a powerful message has come from the mother of Jordan Taylor who died after being stabbed in Trowbridge in March 2017 – the last death in Wiltshire caused by a single blade.

Emma Caley-Taylor said:  “I believe we need to tackle knife crime from the root – which often starts from drink and drugs.
“I appreciate the police are doing all they can but they need help from our government; the whole judicial system needs reviewing.  We need a zero-tolerance approach and judges need to get tougher on those who carry knives.
“Anyone who carries a knife cannot be thinking right – why would you carry one otherwise?”
“My heartfelt message is: anyone who knows anyone who carries a knife please report it to the police because potentially you’ll be saving two lives – that of the victim and possibly the person carrying the knife. ”

Out of the 430 weapons handed in – 223 came from a bumper load of miniature knives handed into Trowbridge Police Station during the fortnight.

Sgt David Tippetts, who lead the campaign, said:  “This has been a major success with a total of 430 knives handed in, from large machetes and swords to small kitchen knives.  Every weapon that has ended up in one of our amnesty bins is one less weapon out there to cause harm.

“I’m not surprised by the number of knives handed in but I am surprised by some of the weapons given to us – especially some of the more fierce looking and larger ones.
“Op Sceptre has helped removed some very dangerous weapons off the streets of Wiltshire but it has also demonstrated the link between drugs and weapons; of course, not all knife crime is linked to drugs but it is often a common denominator.
“Of course, knife crime does take place in Wiltshire but not to the level like in other parts of the country – Wiltshire remains a comparatively safe county.
“However, we are never complacent and we will respond to any intelligence and information given to us by the public, by any community that knife crime can affect.
“If you have any information that can help us please call 101 or contact us anonymously via Crimestoppers on 0800 555 111.”

Assistant Chief Constable Gavin Williams said:  “The success of the Op Sceptre campaign is down to the continued work we do in our communities – not only raising awareness about the dangers of knife crime but enforcing the law – it is illegal to carry a knife and you could face prison.

“The success is also down to those who have been responsible and have handed in a knife during our amnesty – I have nothing but praise for those who have done the right thing and handed in a weapon over the past two weeks.  Thank you.
“As our knife crime figures show, Wiltshire is a safe place to live; the statistics show knife crime has not risen across the county in the past year but we won’t ever rest on our laurels and will firmly deal with anyone who we find carrying a knife.”

Angus Macpherson, Police and Crime Commissioner for Wiltshire and Swindon, said:  “The success of the amnesty in Wiltshire underlines the number of knives held.
“For me,  the campaign made it clear that there was a good correlation between those holding a knife and being part of a drugs network, each being the driver for the other.
“As with all things, it does go much wider, and carrying a knife for young people may be seen as “being cool” but there is evidence that often the victim of a knife crime is also a carrier of a weapon.
“It’s not that “cool” to be seriously injured or even die.”