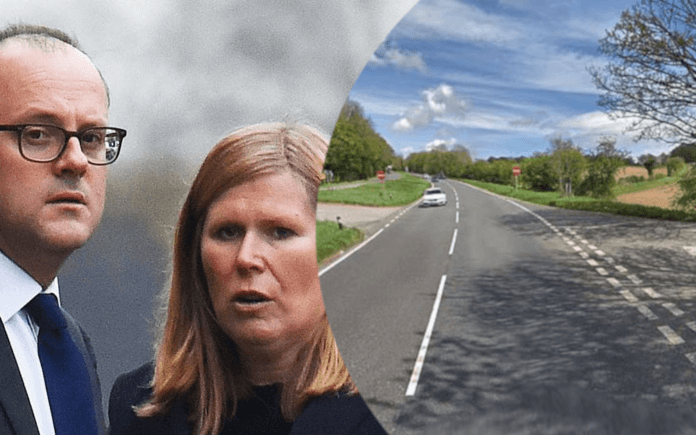 Stannah Stairlifts managing director’s wife has been spared jail time for killing a motorcyclist without due care and attention, after dropping her kids off at school in her Land Rover Discovery at a ‘dangerous junction’.

After failing to spot the 56-year-old motorcyclist, the 4×4 ‘ploughed’ straight into him sending the civil engineer into a tree.

The court later heard Andrea Stannah who is married to Nicholas Stannah, managing director of Stannah Stairlifts Ltd, had to be ‘dragged away’ from the body of the 56-year-old motorcyclist while attempting to assist him.

The man, a ‘highly-regarded’ structural engineer’ who had worked in the industry for many years was pronounced dead at the scene.

Stannah, a local web designer, who attended court with her husband, admitted a charge of causing death by driving without due care and attention.

Prosecutor Kerry Richardson told Basingstoke Magistrates’ Court that witnesses driving on the A31 dual-carriageway in July of last year, braked to avoid the green Land Rover Discovery as it pulled out into the road and saw the motorcycle collide with the 4×4.

Stannah told the court that her Land Rover did not ‘react to my presence’ and earlier said that she ‘applied my brakes heavily’ prior to the engagement.

Mr Rayner’s wife, from Sparsholt, near Winchester, said: “Losing Steve in the tragic accident was devastating for the girls and I and our lives will never be the same again.”

Mr Stein, Stannah’s lawyer, said his client had been traumatised by the crash and was “extremely remorseful”.

Steve Miles, who worked with Mr Rayner at Hampshire consulting engineers Upton McGougan said: “Steve was a very talented structural engineer who was highly regarded by his colleagues and the many professionals and contractors we worked with down the years.

“His presence in the construction industry will be very sorely missed.

Stannah received a sentence of eight weeks in jail suspended for 12 months and has been ordered to pay £200.

Stannah Stairlifts, which dates back to the 1860s and remains a family business, has an annual turnover of £210m.

UPDATE: Ben Harvey “I thought it was a dream”, hears court

Gabriel Ingram - Monday, January 21, 2019
Yesterday, Ben Harvey, of Ridges Way, Little London, had told the court he had been dreaming of killing someone after taking drugs which were...