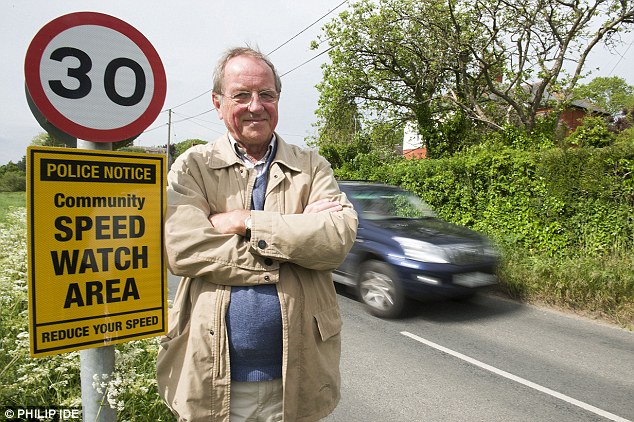 Sleepy village, St Mary Bourne has hit the national press with reports of villagers being at war over a Community SpeedWatch Campaign.

Community SpeedWatch is an incentive run by the police, allowing members of the community to become police support volunteers and take action, helping the police to educate drivers on the roads of concern in their area. St Mary Bourne’s SpeedWatch campaign has been running for two years.

Volunteers set up the speed camera equipment and monitor traffic driving in and out of the village. The speed is recorded by the equipment and volunteers then note down the registration number and speed of the car. The motorist is then sent a letter from Hampshire Constabulary with a warning.

Volunteer, Michael Widen who runs the campaign for the village, is accused of penalising those he does not like in the village and letting off those he does, he vehemently denies the accusation.

The scheme has now been dropped by the local Parish Council after hearing reports of the volunteers suffering intimidation, at the roadside, in the street and in the local village pubs.

Michael Widen, told the Daily Mail, “They call me the speed Nazi, which is incredibly offensive – I was born in Germany but I’m actually Swedish. We’ve been ostracised by half the village but we just want our roads to be safe.

“Before we started, 40 per cent of motorists sped. Now, thanks to us, it’s eight per cent. We went out in the morning to catch the school-run mothers – they drive like lunatics – then we covered the 3pm to 4pm slot to nab the ‘white van men’.

“Finally, we went out between 6pm and 7pm to tackle the rush to the pub. But none of us needs this intimidation. The bullies and the baddies have won.”

Local St Mary Bourne man, Mr Culley told the Daily Mail, ‘They caught me six months ago. They say I was doing 36mph. But I’ve driven all my life and I’ve never got so much as a ticket before. Let the police do their job, and pensioners do theirs – why can’t he just take up bridge like normal people?’

She told the Daily Mail, “I was very cross,’ she says. ‘Who are these people in their jumped-up yellow vests? If they’d wanted to be police officers, they should have joined the force. If they dare flash me again, I have a good mind to run over their feet.”

Other villagers are in favour. Ryan Stacey, 29, who runs the Bourne Valley Inn, told the Daily Mail, ‘Our cat was knocked down and killed last year by a driver doing at least 60mph despite all the signs. These people are going out of their way to keep us safe. We should applaud them instead of calling them names and throwing things.’

Current parish council chairman David Peart, 67, told the Daily Mail: ‘Mr Widen and his team have done a fantastic, thankless job and I just hope it starts up again. I would never condone any level of intimidation.’

Speaking to The Daily Mail, The vicar of St Mary Bourne, the Rev Craig Marshall, last night called for ‘peace and love’ to resume, adding ‘The speed limit is there for a reason and the campaigners have been keeping our beautiful village safe. The villagers who have intimidated them should look to their own conscience.’

You can read the full story on the Daily Mail website by clicking the following link:

Photo courtesy of the Daily Mail