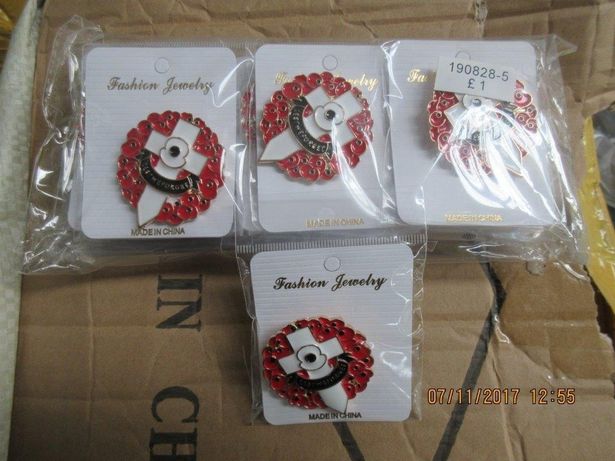 With just a few days to go before Remembrance, The Intellectual Property Office (IPO) and The Royal British Legion are urging members of the British public to be extra vigilant when buying poppy merchandise for Remembrance this year.

Their donations are intended to support Armed Forces community men, women, veterans and their families. Instead, they could end up benefitting fraudsters if their poppy merchandise turns out to be fake.

The PIPCU team has been targeting suspected sellers by visiting addresses and speaking with people in connection with this crime. In Autumn 2017, Border Force officers at Tilbury intercepted a shipment of poppy merchandise intended for the UK worth in the region of £150,000.

Intellectual Property Minister Sam Gyimah said: “It is truly shocking that anyone would target and exploit one of the UK’s most cherished charities and take advantage of public support for our Armed Forces community.

“Together we can ensure donations go to the people they are intended for, by only supporting approved merchandise. Be vigilant when you are buying your poppies this year, and look out for the Royal British Legion logo to ensure the merchandise is approved and genuine.”

Claire Rowcliffe, Director of Fundraising, from The Royal British Legion said: “It is a sad fact that there are people who actively defraud the public in order to take funds intended for the support of our Armed Forces community. We would urge everyone wishing to purchase a Remembrance poppy brooch, to do so through official channels.

For example, you can buy from one of our trusted volunteers, from The Royal British Legion’s online Poppy Shop, or from one of our corporate partners. “Join with us, the IPO and PIPCU to help make sure your donation doesn’t line the pockets of criminals. We want to make sure that it goes to supporting those who have made such a unique contribution to our society”.

Fake poppy merchandise – what to look for The public are being asked to look out for counterfeit goods in the shape or bearing the image of, The Royal British Legion’s familiar two-petal red poppy, or Poppy Scotland’s four-petal poppy in Scotland. To help consumers beat the fraudsters, here are the top tips to avoid buying fake poppy merchandise online:

• Be a ‘responsible buyer’ – buy from official channels and The Royal British Legion’s corporate partners.

• Avoid cheaper priced products. If the price is too good to be true, it usually is.