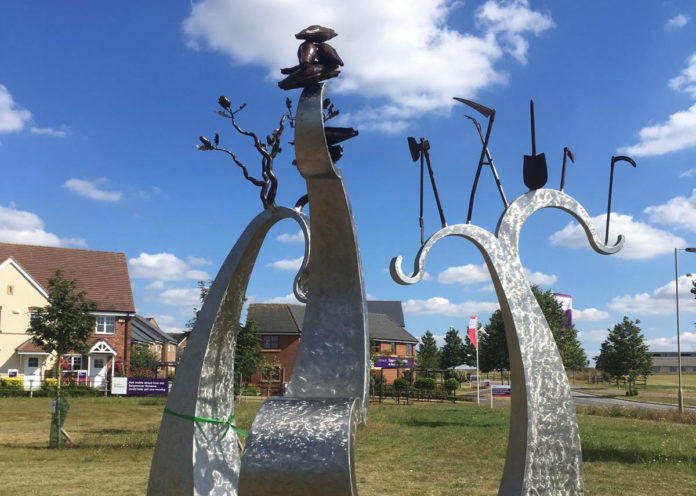 On a gloriously sunny Monday, 15 July, the Augusta Park Community Centre was host to the unveiling of two new public artworks for Augusta Park.

The artworks, funded by Section 106 contributions from Taylor Wimpey, the developers of the site, have evolved over a long period of consultation with the residents and school children from the new development.

Leader of the council, councillor Phil North officiated, cutting the ribbons round the sculptures to mark their inclusion at Augusta Park.

Councillor North said: “We have a clear policy in Test Valley that we don’t just deliver developments, we create communities.

“That’s why I was delighted, along with the artist, Denis O’Connor, to officially unveil the two new sculptures in Augusta Park this afternoon.

“The money Test Valley secured from Taylor Wimpey, via developer contributions, hasn’t just paid for physical infrastructure but has also funded community development workers and fantastic pieces of public art – to help turn a housing development into a community.”

Artists Denis O’Connor and Bernie Rutter worked extensively with residents to come up with the final concepts and forms for the sculpture.  At the opening ceremony, Denis reiterated how important the community’s involvement had been to help create artworks that resonate with both the

READ MORE: £73k Artwork to be installed for Augusta Park

people and the place.  Work from the school pupils of Endeavour School and other participants in the process was exhibited at the Community Centre, and a slide show from Denis showed the process that he had gone through to arrive at the final results.

The sculptures now shine in the sun.  They make a wonderful feature for the development and mark a bringing together of community ideas.