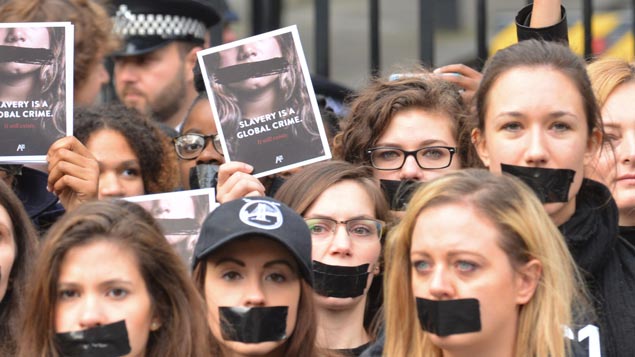 We’re launching a new campaign that aims to increase the amount of intelligence we receive on modern day slavery.

The campaign, called #TellUsWhatYouSee, aims to educate the public on the signs and indicators of various forms of Modern Day Slavery, and how to report this information, in order to help us tackle this crime.

Forces in the South West have seen a 5% increase in intelligence reporting between 2016 and 2017, receiving a total of 3272 pieces of intelligence. Forces anticipate this figure will rise next year, having already surpassed the 2017 figure with two months left till the end of the year.

While the increase is positive and in part down to increased media attention on modern slavery in nail bars and car washes, there are still many forms of lesser-known modern slavery going on, in neighbourhoods and local communities across our force area.

Labour exploitation, which is linked with industries such as car washes, nail bars and building sites, is the most common form of intelligence we’ve received information on, followed closely by sexual exploitation, which covers brothels and sex workers. Reports of criminal exploitation and domestic servitude are minimal and are lesser known to the public as modern slavery.

We know domestic servitude is happening across the UK but there is very little information on it due to how invisible this form of modern slavery can be. Only one force has received a report of domestic servitude out of the hundreds of reports we’ve received year on this form of modern slavery. We are keen to hear from anyone who suspects domestic servitude is happening. Some of the signs to look out for include an individual who is not only responsible for children 24 hours a day, but also for the cleaning or day-to-day housework and is never allowed to leave home alone.

Assistant Chief Constable Craig Holden, Chief Officer Lead for Modern Slavery and Human Trafficking at Wiltshire Police, said: “I welcome the fact that intelligence submissions we receive from the public are already up on the previous year. This goes to show that the local communities of Wiltshire and Swindon are taking this issue seriously and are supporting us in our fight against this horrific crime.

“However, we need the public to continue being our eyes, telling us what they’re seeing and sending that information in, either direct to police on 101 or through the Modern Slavery Helpline on 08000 121 700.”

“Modern slavery is a serious, complex and challenging issue for police forces and partners across the country. It is not just a ‘big city issue’. Wiltshire is a safe place to live but that doesn’t mean it is immune.

“The Chief Constable and his team will continue to ‘lift the stone’ on this toxic crime in our communities. I want to see offenders brought to justice wherever possible through close cooperation with our partners.”

There were 93 active on-going investigations linked to potential modern slavery within the South West force area as of 15 October and these investigations rely heavily on information received from the public, also known as intelligence.

Put simply, intelligence is information, which can arrive in a number of ways to us and plays a crucial role in the disruption and prosecution of Modern Day Slavery. One piece of intelligence could be the missing piece an investigator needs to carry out a safeguarding visit or issue a warrant for an arrest. That’s why it’s vital that the public tells us what they see and report any activity they suspect could be linked to modern day slavery.

Since 2016 forces in the South West have made 541 referrals through the National Referral Mechanism, which is a framework for identifying victims of human trafficking or modern slavery and ensuring they receive the appropriate support.

The NRM is also the mechanism through which the Modern Slavery Human Trafficking Unit (MSHTU) collects data about victims. This information contributes to building a clearer picture about the scope of human trafficking and modern slavery in the UK.