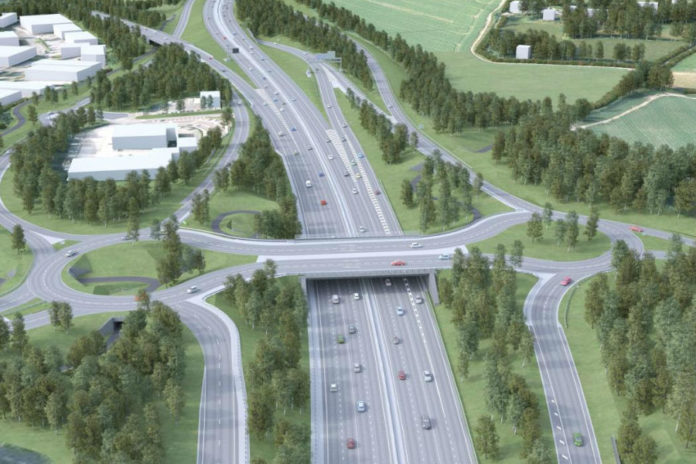 Plans for a major upgrade to one of the busiest motorway junctions on the M3, junction 9 at Winchester in Hampshire, have gone on the show this week.

Under the plans, the Winchester junction, where the M3 interchanges with the A34, will be redesigned to create dedicated free flow lanes which will allow drivers travelling between the M3 and the A34 to travel freely between the two roads to avoid using the junction roundabout.

The roundabout itself will be redesigned into a new ‘dumbbell’ layout, which will increase capacity, improve safety and make journey times more reliable.

Caption: How the resigned M3 junction 9 will look when complete in 2023The plans went on show yesterday with the consultation running for eight weeks until 27 August 2019.

“We have worked hard on developing the plans for this busy junction since we first published the designs early last year. As well as making a real difference to peoples’ journeys, we are proposing a better, safer, and quicker way to interchange between the M3 and A34, which is a major route from the Midlands to the ports on the south coast.

“More than 6,000 vehicles use this junction each hour during peak times and making the junction free flow will stop queues backing up onto the main carriageway and reduce the risk of collisions. Not only will the improvements help to separate local and long-distance traffic, we are also improving access for pedestrians, cyclists and equestrians. The plans are on show until 27 August and I encourage anyone interested to come along to one of our exhibitions or send us their feedback.”

Winchester MP Steve Brine said:“This has been one of the longest-running issues over the past decade, and I have fought for years for improvements to junction 9. We have a massive opportunity to make a real difference here, so I urge all constituents to take a look and take an active part in shaping the scheme. We have to get this over the line.”

“Securing Improvements for this critical junction has been a top priority for the County Council for a number of years, and we are very pleased that Highways England’s proposals are now published for consultation. This is a critical junction on the national road network as well as locally, and the planned improvements, will help to separate strategic and more local traffic at Junction 9, as well as improving facilities for cyclists and pedestrians.  The County Council has been pleased to work with Highways England as they have been developing their proposals and encourages everyone affected to take part in the consultation and express their views on the scheme.”

The improvements to the junction include:

The M3 is the main road between London and the Solent Ports, while the A34 is the main corridor between the south coast and the Midlands. Around 110,000 vehicles use the junction every day, including over 5,500 HGVs, from Southampton and Portsmouth Docks.

Six public information events are being held in Winchester and Kings Worthy, and details on the plans available online until 27 August 2019 at: https://highwaysengland.co.uk/projects/m3-junction-9-improvements/

Polly Mayweather - Saturday, August 3, 2019
Test Valley Borough Council (TVBC) have threatened legal action against landowners who have 'Bin The Incinerator' campaign boards on their fields. Threats to landowners were...