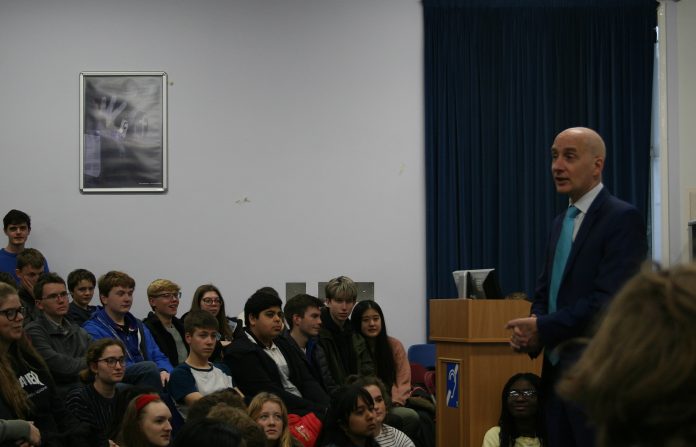 Lord Adonis, Labour peer, former Transport Secretary and former Schools Minister travelled to Peter Symonds College to deliver an entertaining and informative talk on the current Brexit negotiations and their constitutional implications to a lecture theatre packed with students and staff.

Lord Adonis’ talk generated plenty of discussion and there was a lively question and answer session afterwards, covering both sides of the Brexit debate and some of the wider issues affecting politics today.

Students’ comments included ‘Lord Adonis was engaging and interesting’; ‘Lord Adonis came across as very wise in his analysis of the current political situation. He was also very humorous and kept the audience interested’; and ‘he provided an interesting and rare insight into the inner workings of the political world and the second referendum campaign.’ One student described Lord Adonis as ‘an amazing speaker who was compelling, passionate and extremely knowledgeable. Through his speech he not only astounded me with the sheer charisma he showed, but also informed me on the issues facing this country in the imminent future.’

Politics teacher Jo Thomas, who arranged the visit, said, ‘We were absolutely delighted to receive Lord Adonis at Peter Symonds College for a very enjoyable and animated debate. The students asked some insightful and challenging questions and displayed real maturity in considering all opinions.’