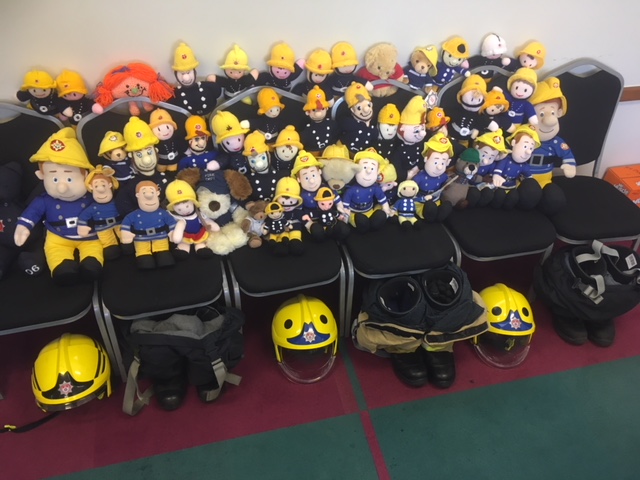 6
SHARES
ShareTweet
When a firefighter put out a Facebook appeal for a special teddy bear he was in for a BIG surprise – with toy animals arriving at the station in their droves.
On-call Crew Manager Richard Scarth put out the social media plea after they gave their engine mascot to a child at the scene of a bus crash.
The toy was regularly used at incidents to comfort, calm and distract children when they, or their parent, were being helped by firefighters. Crews from several other fire stations also gave away toys at the scene.
Crew Manager Scarth was shocked when more than 100 teddy bears arrived at the station including hand-knitted fire-themed dolls, Fireman Sam toys and the Blaze bear from The Fire Fighters Charity.
Among the gifts was a consignment of Mr Men with a note saying: “I can’t knit firefighters but I’m quite good at these – hope they are of use.”
Another offering was an old Hampshire Fire and Rescue Service shirt that a well-wisher had transformed into a bear with rank markings on its foot and the badge on display.
Crew Manager Scarth, who in his full-time job is the director of London-based Royal Free Charity, said: “A lot of firefighters bring in a toy to keep on the engine to help calm or comfort children at incidents.
“However, we attended a crash where the child went to hospital with their mum and took the toy with them. I know at the same scene other fire crews ended up giving away their teddies too.
“I just put the post on Facebook as a throw away comment and we were completely overwhelmed by the kindness and support from the public.”
He went on to say Whitchurch Fire Station no longer required toys and the sleuth of surplus bears would be passed on to other crews across Hampshire and beyond.

The original message read: “I have a plea to ask whether Facebook can work its magic…

“So that we are fully equipped in the future – are there any keen knitters or crafters out there that fancy replacing him for us, or even a bought fire bear or similar?

“Another little boy or girl teddy that’s fire related will without doubt help another child in future – over to you Facebook friends.”

It was quickly shared more that 4,000 times with almost 1,000 comments with offers of help.