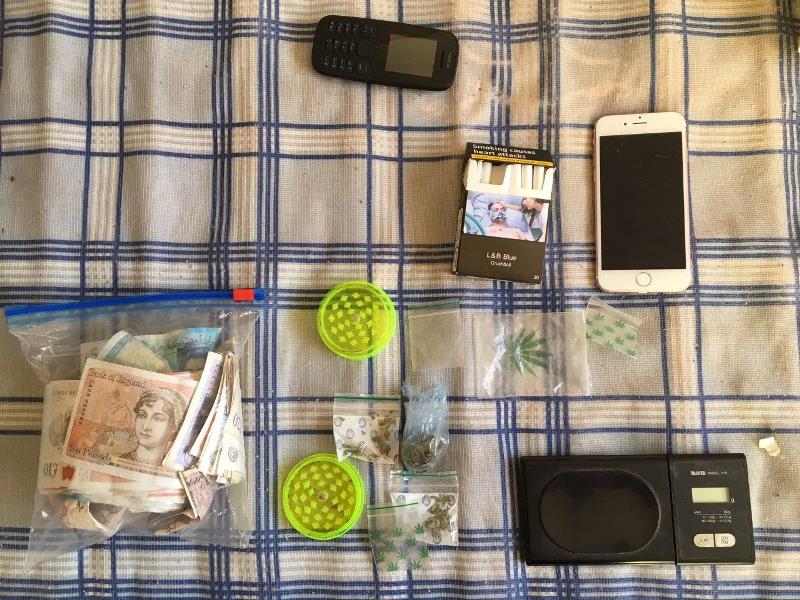 A machete, a large amount of cash, drugs and number of stolen bicycles and mopeds were some of the items seized after drug warrants were successfully carried out this morning (25/09) at two addresses in North Swindon.

Officers raided the two houses on Wilcox Close as part of Op Sceptre – our knife crime prevention initiative and amnesty which is running until Sunday 30 September.

At one address, a number of stolen bicycles and mopeds were found along with some cannabis and a knife – and we have already identified the legal owner of one of the bicycles seized.

At the other address,  a 15 inch machete-style knife, approximately £8,000 in cash and some class A drugs were discovered.

Sgt David Tippetts, who led the operation, said:  “This very successful operation today shows that more often than not weapons are linked to drug supply.  This is a timely reminder during our Op Sceptre knife awareness and amnesty fortnight and reinforces the message that you are more likely to be a victim of knife crime if you carry a knife.
“This also sends a message to the people living in the area – we are listening to you and we will act on the intelligence you give us.
“Please contact us if you suspect anyone dealing in drugs or carrying out any sort of criminality in your area.”

Angus Macpherson, Police and Crime Commissioner for Wiltshire and Swindon, said;  “It’s good to see the police getting in to our local communities, following up and then reacting to the intelligence passed on to them from local people.
“An operation like this is so important on many levels; firstly, it takes criminals off the streets of Wiltshire but it also sends a message to local communities that we are interested in tackling drug and knife crime and we welcome your information and intelligence.
“Although Op Sceptre is primarily about knives it’s also wider than that because knife crime often goes hand in hand with the drugs industry – if you tackle one, you tackle the other.”

If you suspect drug activity in your area, please provide police with as much information as possible.  This information will be treated in the strictest confidence and will help us disrupt crime that impacts negatively on your community.  You can contact us on 101 or anonymously via Crimestoppers on 0800 555 111.