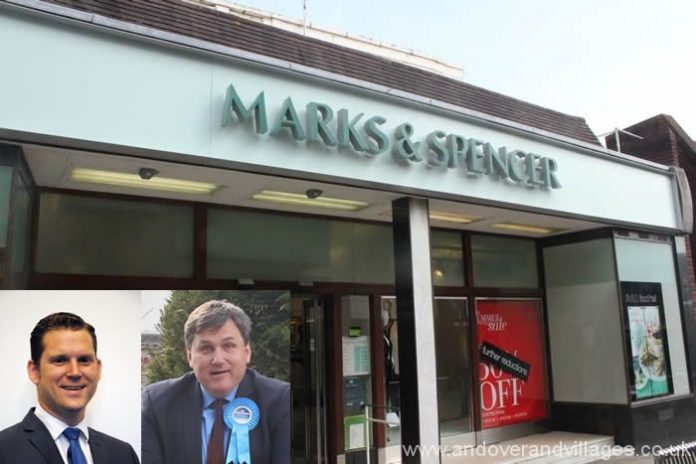 The duo have been attempting to secure the presence of Marks and Spencer in Andover’s High Street after devastating news earlier this month indicated a closure was imminent.

Berendji reiterated that Marks and Spencer wish to keep a Food Hall presence in the town, but that the cost implications of changing the High Street store to accommodate this would not be commercially viable.

Berendji told Malthouse and North that the High Street giant would look to sublet the Andover store if the closure proceeds.

Cllr North pledged the help of TVBC to secure an attractive tenant and indicated that it would be unacceptable to leave the unit empty for a prolonged period of time.

Kit Malthouse said: “I was immensely frustrated by M&S’s position in the light of the ambitious plans for Andover Town Centre such as the Town Mills Urban Park, the Cultural Quarter and the redevelopment of the Chantry Centre. This frustration was only exacerbated by M&S staff relaying to me that they had been told that Andover was the best performing store in the region. We were at least given commitments that, if the store does close, then the future of the staff will be a priority consideration.”

Councillor North said: “It was particularly galling to hear past under-investment being given as a reason for M&S’s problems in Andover. Their proposals to close stores ranging from Andover to Covent Garden demonstrate how they are struggling with the changing nature of the High Street. Their commitment to shifting much of their business online nationally should not in my view preclude them from retaining a food offer in Andover High Street. However, we must now look to the future and do the very best that we can for Andover.”