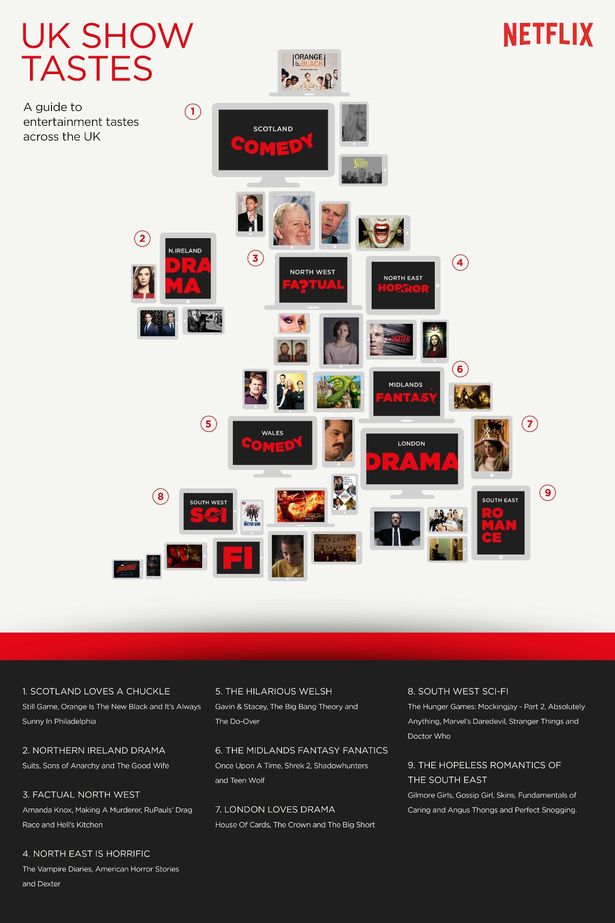 Ayup, hiya, wotcha and alrigh? Turns out a chummy greeting isn’t the only thing that differentiates the UK, what people watch on Netflix varies too.

Today, Netflix reveals how entertainment preferences compare across the UK – from The North, The Midlands and Greater London to The South, Scotland, Wales and Northern Ireland. It turns out, when members have the power to choose what they want to watch, some interesting regional patterns emerge. Southerners in the east crave a bit of romance.

Members in the South East are more likely to love love, watching series like Gilmore Girls, Gossip Girl and Skins as well as films like Fundamentals of Caring and Angus Thongs and Perfect Snogging.

Southerners in the west crave a bit of geek.

Meanwhile, members in the South West have more of a flare for science fiction enjoying titles like The Hunger Games: Mockingjay – Part 2, Marvel’s Daredevil, Stranger Things and Doctor Who.

Viewers in the North-East are more likely to scream for horror compared to elsewhere in the UK with some popular titles including The Vampire Diaries, American Horror Stories and Dexter.

The North West expands its mind with factual content.

Those in the North West are more likely to enjoy a dose of reality, ranging from the true and thought-provoking, like documentaries Amanda Knox and Making A Murderer, to the loud and outlandish, like reality series RuPauls’ Drag Race and Hell’s Kitchen.

Members in the Midlands prefer the fantastical.

Altered realities and a bit of magic, those in The Midlands watch more fantasy than the rest of the UK with some top titles including Once Upon A Time, Shrek 2, Shadowhunters and Teen Wolf. London and Northern Ireland are all about the drama.

Bingers in London and Northern Ireland are the most likely Brits to get sucked into dramas with titles including House Of Cards, The Crown and The Big Short reigning supreme in London while Suits, Sons of Anarchy and The Good Wife fit the bill in Northern Ireland.

It’s all about a good giggle for the Scots and the Welsh.

There’s actually some similarity between the tastes of the Scots and the Welsh – comedy. Shows that get top laughs in Scotland include local hit Still Game as well as Orange Is The New Black and It’s Always Sunny In Philadelphia. In Wales, Gavin & Stacey and The Big Bang Theory prove popular as well as comedic films such as The Do-Over.