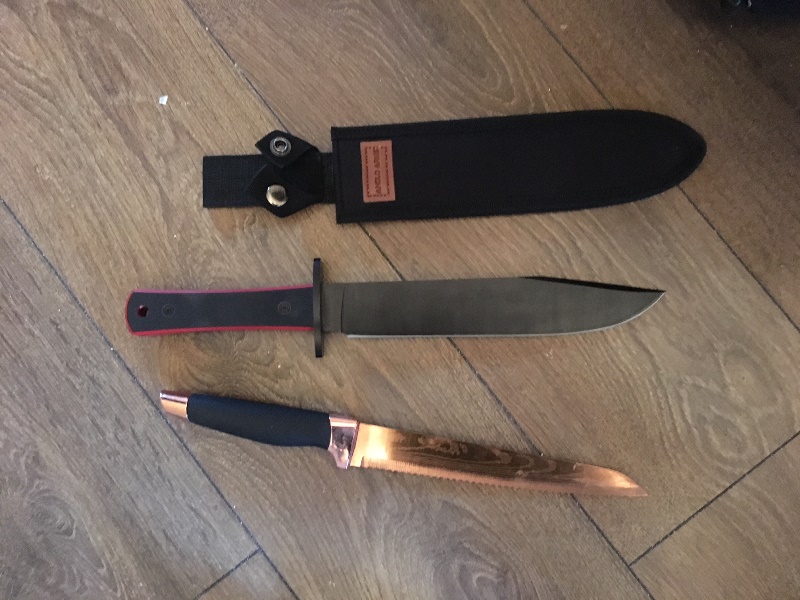 Two knives have been seized following the arrests of three teenagers in relation to a County Lines operation.

On Monday 24 September 2018, our officers arrested a 19-year-old man, a 17-year-old male and a 15-year-old male at a London address on suspicion of conspiracy to supply class A drugs from London into Wiltshire – all three are from the London area.

During the arrests a large red handled 10-inch-long machete was discovered tucked in to one of the juveniles’ waistbands and another gold coloured knife was found in a rucksack in the property.

DC Ian Tilley said:  “Following good intelligence in regard to County Lines linked to these individuals we managed to track them to London and successfully made the arrests.  On top of that, finding these weapons is an additionally good piece of work – ensuring that there are now two more harmful knives off our streets today.”

The arrests come during our Op Sceptre fortnight – our knife crime prevention initiative and amnesty which runs until 30 September.

During the period of the amnesty those handing in knives and weapons will not face prosecution for possession of a knife or weapon and can remain anonymous.

Our amnesty bins are available at six specified police stations across the county:

and the Temporary Police Station at the rear of Five Rivers Leisure Centre in Salisbury.

Anyone handing in a knife or weapon during the amnesty is advised to check the opening times of their station by visiting the Wiltshire Police website or calling 101.

If you have information about someone who carries a knife or is involved knife crimes please call us on 101 or 999 in an emergency. Information can also be left anonymously via Crimestoppers on 0800 555 111.