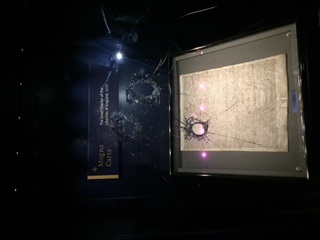 A 45-year-old man is in custody this morning arrested on suspicion of attempted theft of the Magna Carta.

Shortly before 5pm yesterday (Oct 25) alarms were activated at Salisbury Cathedral after an attempt was made to smash the glass box surrounding the Magna Carta. Staff were alerted and police were called.

A man matching the description given by witnesses was arrested on suspicion of attempted theft, possession of an offensive weapon and criminal damage, and has been taken to Melksham custody for questioning where he remains.

The Magna Carta has not been damaged and nobody was injured in the incident. We are aware there were a number of witnesses to the incident who may not have spoken to police. If this was you, please get in touch via 101 and quote crime reference number 541800101438.