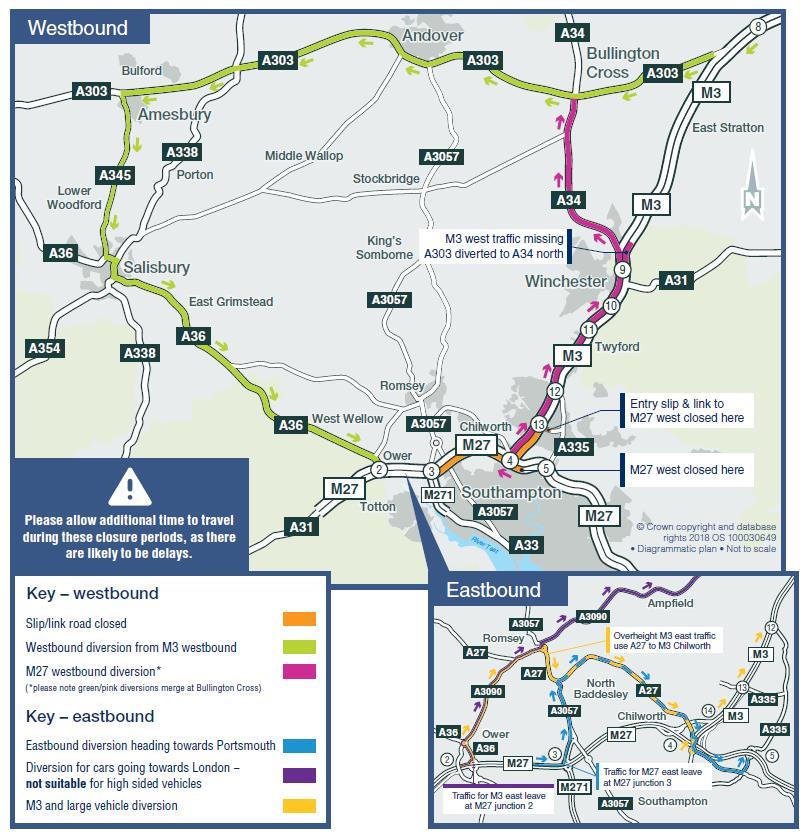 1
SHARES
ShareTweet
Road users are reminded that the weekend closure of the M27 between junctions 3 and 4 starts tonight at 10pm.
The M27 will be closed from 10pm tonight and will reopen at 5am on Monday 1 October. This is to allow for the demolition of the western half of Romsey Road bridge.
This vital work has been carefully planned, but severe congestion is expected in the area and road users are advised to plan their journeys, leave plenty of extra time, and consider using alternative modes of transport where possible.
During the closure the following clearly signed diversions will be in place:
Eastbound:
Traffic on the eastbound M27 will be diverted off the motorway and directed towards Romsey. High-sided vehicles will be diverted along the A27 through North Baddersley to re-join the M27 at junction 5, avoiding the low bridges in Romsey. Vehicles not exceeding the height limit will be diverted along the A3090 to the M3 just south of Winchester.
Westbound:
The westbound M27 will be diverted via the M3, A34, A303, A345, A36 to re-join at junction 2. The westbound diversion will also be signed from junction 8 on the M3 so that southbound M3 traffic can join the diversion route by using the A303. There will also be a diversion route for the A3057 (Romsey Road) itself.
This weekend closure will be the first of three. The second closure will take place next April to install the new bridge, with a third closure in October 2019 to demolish the eastern bridge.
This work has been carefully planned and agreed with Hampshire County Council, Southampton City Council, Hampshire Police and other stakeholders. While the motorway is closed, Highways England and its contractors will use the closure to carry out routine maintenance, such as vegetation clearance and drainage work.