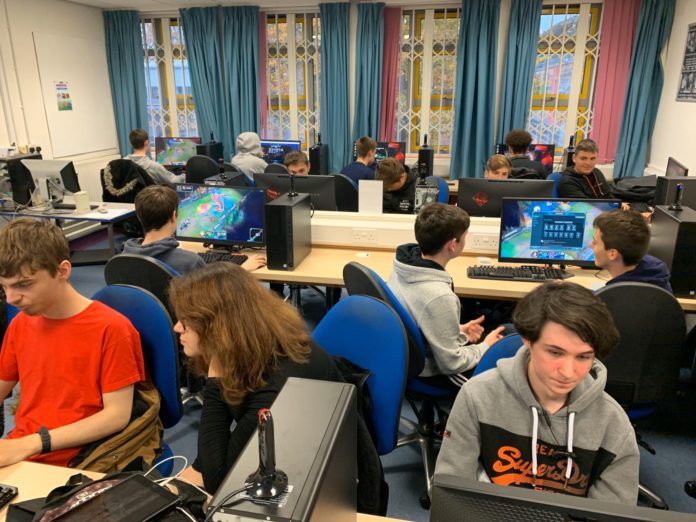 Queen Mary’s College in Basingstoke, near Andover, launched their ‘Esports’ A-level course amid the active industry worth a staggering £1bn by the end of 2019.

There are an array of esports betting sites like Bet365, Betway esports and GG.bet have capitalised on the industry by offering bonuses and promotions on games such as League of Legends Worlds 2019, CS:GOL and Dota Summit 11 Minor.

Queen Mary’s College in Basingstoke saw over 50 students sign-up to the enrichment course, the course allows the participants to train in order to compete against other British Esports Association Schools.

Students have played games such as Overwatch, League of Legends and Overwatch.

The college has recently been awarded tens of thousands in funding for the course. more follows.

If you’re interested in finding out more, please email James Fraser-Murison (Director of Learning for the Creative Arts) James.fraser-murison@qmc.ac.uk

Over the course of several decades, the video games industry has grown into a multi-billion dollar sector.

And now, in this sense, esports are building their own market. It has achieved sales of nearly 500 million dollars this year, with more than 130 million esports fans all over the globe.

But, how has the industry grown so much?

Okay, some of the okay known early video games were actually competitive when they recovered a few decades. Tennis With two teams from the’ 50s and Pong in the early’ 70s, they each played a ball of two pixels to record a score better than the other team.

The 1980 Atari Space Invaders competition was one of the most successful sporting events in history, where players (about ten thousand participants) attempted to achieve the highest score. According to this, University of Stanford organised a much smaller Spacewar event in 1972.

Twin Galaxies produced and started to chart the top players in games like Donkey Kong and Space Invaders in 1981, a gaming world record organisation.

But the game took further development during the 1990s. Further competitive arcade games were made, like the Super Street Fighter II, a traditional 2D one-by-one brawler, whereasthe players played together on local area networks (LAN) with PC games like Doom (in addition to revolutionising the shooter).

Both introduced were Quake and StarCraft, which both will continue to advance gaming.
The first major Street Fighter tournament was held in California in 1996, as per tournaments. The 40-man annual contest, called’ Battle of the Bay,’ will be later turned into the EVO, still going on today.

Then, in 1997, the US tournament for Quake Red Annihilation attracted over 2,000 entries. Dennis “Thresh” was the winner and the designer John Carmack’s Ferrari was awarded the trophy.

Founded in 1997, the Cyberathlete Professional League began to make a name for itself, including Johnathan’ Fatal1ty’ Wendel (pictographs), who has earned some $50 000 million in awards over his career in esporting industry.

Fatal1ty signed several endorsement deals and even worked with his own PC accessory company.

New shooters appeared in 1999, Unreal Tournament and Counter-Strike, which became one of the most popular sports games in the world.

In the 2000s, online console gaming hit higher levels. The advent of online services, including Xbox Live, allowed console players to play in games like the first person shooter Halo 2, which paved the way for other popular online titles, including a duty call.
This made playing with their mates over the internet much smoother.
The years of the Esport boom in the 2000s have seen increased popularity of games such as StarCraft and Counter-Strike. Many gamers play online and are many integrated than ever before to broadband internet, video content and new internet technologies.

The 2000’s saw the creation of some of today’s largest and most popular sports teams-Fnatic, Team Dignitas, Optic Gaming, SK Telecom T1 and TSM. Providers for tournaments like ESL and competitions like Dreamhack have become more popular.

With more sport sponsors, bonus pools increased, as were the level of play and the general infrastructure of competitive games.

Events became even bigger from 2010 onwards. The Multiplayer Online Battle Arena (MOBA) games have fused tactics and RPG elements and have become a real hit for two teams of five players. Each player controls a single character who can purchase new items and kill the enemy team and break their fortress.

The League of Legends (launched in 2009) and Dota 2 (2011–even if their last version came in 2013) are two of the most popular MOBA Games, and they have received major follow-ups. League of Legends reportedly has about 100 m games. Looking at the Dota 2 International Pool this year, it’s over $20 million while the Law League is under $4 million.

Now, sports are more important than ever. There is a large number of sports teams and tournaments, with substantial prize pools and strong online audiences and streaming platforms like Twitch (which allows people to watch their favourite sport games or watch live online gamers).
Nevertheless, as with real sports, there is a need for legislation, sponsorship, grappling and more. In the next few years, the long-term growth, sustainability and general acceptance in esport will be critical.