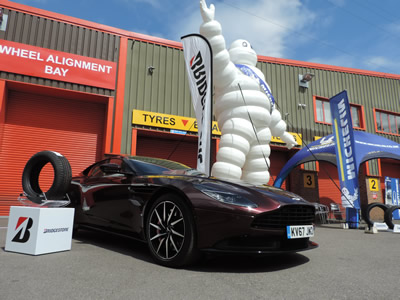 A charity car show in Andover, Hampshire on 22nd July 2018, raising over £1,000 for a local charity for a second year running.

After the success of Merityre’s first ever car show last year, the car show held strong once again in the main warehouse yard, with around 60 drivers turning up to display their cars – once again a selection ranging from classics to the latest hot hatches and even a rally car. The public who popped down to the free event enjoyed the variety of cars as well as ice cream, food, raffle, music and activities provided throughout the afternoon.

The whole day’s event was once again in aid of local charity Naomi House & Jacksplace, who provide expert hospice care to more than 440 life-limited and life-threatened children, young people and their extended families across the south of England. The final total Merityre raised on the day stands at £1,176.40, which tops last year’s total raised at the show. The money came through a variety of activities on the day, including a raffle with prizes donated by tyre manufacturers and local businesses, face painting, fun activities and car show entry costs.

The overall winner of the show this year was Robert Coe, with his 1935 Bentley which stole the hearts of attendees and the judges alike, with its immaculate interior and exterior rarely seen in a car of over 80 years old.

A spokesperson said, “We had so much positive feedback after last year’s show that we simply couldn’t say no to running it for a second year – and once again we have been overwhelmed by the generosity and support of the local residents and car community. To top last year’s amazing total raised is a huge achievement and we can’t thank everyone enough, this will be another great help to Naomi House & Jacksplace and the continued hard work they do.”

The event was supported by tyre manufacturers including Goodyear, Dunlop, Bridgestone, Cooper, Pirelli, Continental and Michelin, who all assisted the day’s activities with a reactions test, football game, giveaways and a selection of tyre information and freebies and more.