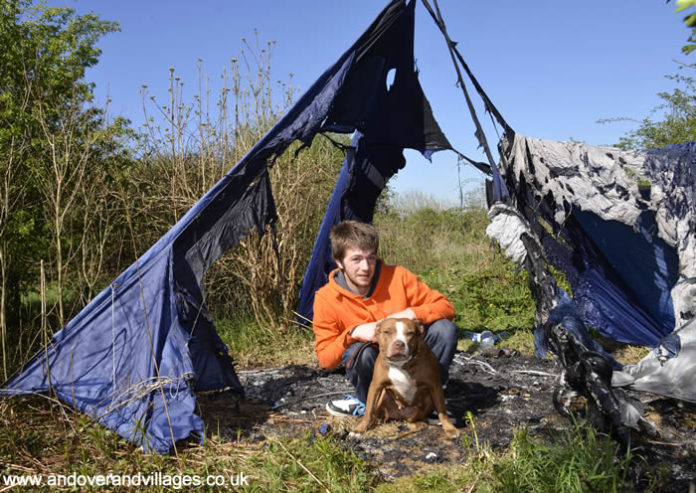 A local Andover man has hit rock bottom this week after the tent, which he had had to resort to living in for the last few months, was burnt down.

Daniel Knight is 21 years old and has had a troubled life. At the age of 16, he went to live in Sarum House because his family were struggling to cope with his alcohol and drug issues. After being evicted from the home for young people following an incident involving drink and drugs, Daniel ended up living here and there until finally, some months ago, he had to leave the squat he had been staying in to live in a tent.

Throughout the last year, Daniel’s companion was Chloe, an eight-year-old Staffordshire Bull Terrier who has had a similar unstable background to her devoted owner, prior to being in his care. It is because of this, re-homing Chloe is absolutely not an option for Daniel, who relies on her as much as she him.

Daniel told Andover & Villages, “I am completely clean now, I don’t do drugs or drink alcohol and I want to get a job, but it’s impossible while I am living in a tent.

“I just don’t know where to turn; I keep being told that to be homed, I can’t have a dog, but I just can’t get rid of Chloe – she is what keeps me going.

“I am so low and desperate that I just don’t want to be here any more. I just want to hurt myself.”

The tent Daniel was staying in was still zipped up when it was set fire to prompting speculation that those who set the fire did not know if he was inside.

Homeless Charity Shelter say, “If you are homeless and have a pet, the council should consider arranging accommodation for you with your pet (especially if you rely on your pet for companionship).”

A spokesperson from Test Valley Borough Council said, “We are sorry to hear that Mr Knight is unhappy with the help and advice he has received from the council.

“If someone contacts us for emergency housing then we will do everything we possibly can to help them.

“We work closely with a wide range of local supported housing projects, but unfortunately they have their own rules regarding pets, which we do not have any control over. We would certainly never advise somebody to get rid of their dog; we would simply explain the options available to those with pets.

“Given the limited number of places that will accept dogs, we would encourage those with a dog to look at temporary arrangements for their pet until they are settled and can find somewhere that will accept animals. They may be able to leave the dog with friends or family, and if this is not an option then we would also put them in touch with our animal welfare officer to look at temporary fostering. This would be on a short term basis and would simply help ensure they could be housed as soon as possible.

“Having a dog does not mean that an individual or family could not be housed but unfortunately it does reduce the options available to them. We will always provide all the support we can, but it is then for the individual to decide what is best for them.”