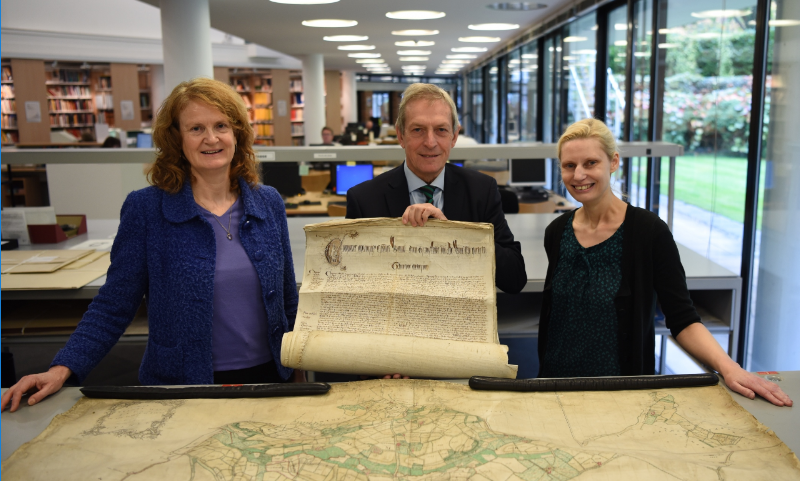 The County Council’s Executive Member for Culture, Recreation and Countryside, Councillor Andrew Gibson, said: “Hampshire Record Office has, since its creation seven decades ago, played a vital role in gathering and looking after a vast range of historic documents from across the region – so that current and future generations can discover Hampshire’s history and heritage.

“Many people don’t realise the great variety of records and interactive resources held at the site in Winchester, how the documents can help provide a vivid sense of the past, and how that resonates with the present day. “We would encourage everyone to visit the Record Office, whether it’s for research or for attending workshops and events, to discover what they love about Hampshire’s past.”

The Record Office officially opened on 20 October 1947, in the former premises of a bank in the city’s High Street. It relocated to the County Council’s Castle Avenue offices in 1959, then to St Thomas’s church in 1972, before moving to its current, purpose-built premises on Sussex Street, in 1993.

Wessex Film and Sound Archive, also based at the Record Office, brings history to life through 38,000 visual and audio recordings, from late Victorian times to the present day.

The historically significant items preserved by the Record Office include:

Winchester Pipe Rolls – The most complete set of manorial accounts in the country, dating from 1208/9 almost unbroken to 1710/11. They depict a record of income and expenditure across the Bishop of Winchester’s estates across southern England. The Pipe Rolls were placed on the UNESCO UK Memory of the World Register in 2011.

Jane Austen documents – including Jane’s baptism record from 1775 written by her father, and the record of her burial in Winchester Cathedral, in 1817.

10th century Anglo Saxon charter – dated 957, this document recording a grant of land, has been a part of Winchester Cathedral’s archives for at least 370 years, although it actually relates to Conington in Cambridgeshire.

Florence Nightingale’s letters – Over 100 letters by the nurse who became known as the ‘lady with the lamp’ during the Crimean War, including one she wrote in 1826, aged 6, to her ‘Aunt Ann’ about the eclipse of the moon.

Oldest film reel – the firing of torpedoes from the side of a naval ship in North Harbour in Portsmouth, which dates from 1897.

Before the Record Office was established, the county archives were cared for by the County Council from 1889.