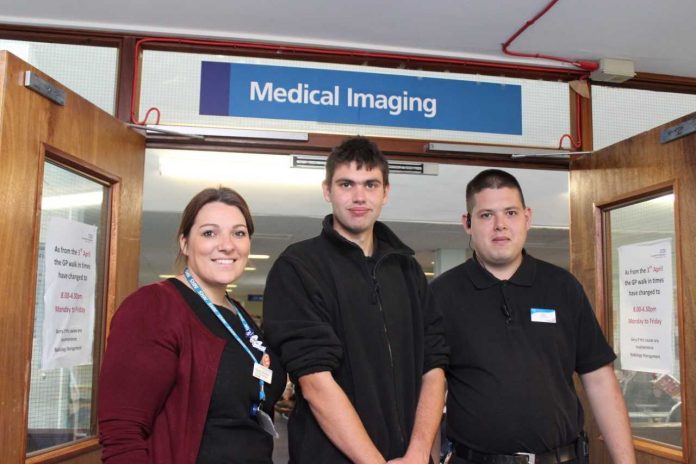 YOUNG people with learning disabilities, learning difficulties and/or autism have joined teams across Hampshire Hospitals after the Trust signed up to a national programme.

10 people aged between 19 and 21 have been taken on as interns, giving them experience of a working environment and helping them to develop confidence, independence and transferable skills to take forward in their working lives.

They are spending the academic year working alongside hospital staff in a variety of departments, including speciality medicine administration, discharge lounge and support services, working in the Trust’s hospitals in Basingstoke and Winchester.

Hampshire Hospitals is one of just 10 Trusts across the country – and the only one in Wessex – taking part in the Project Choice programme (run by Health Education England).

Project Choice aims to bridge the gap that people with learning disabilities, learning difficulties and /or autism experience between education and employment. It works with organisations to find suitable placements and supports both the interns and the hosts by providing training. The project aims for the interns to be work ready and they will be supported to make a transition to paid employment, apprenticeships or further training at the end of the programme.

One of the young people enrolled on the programme is 20-year-old Kieran Fisher, who has Autistic Spectrum Disorder.  Kieran is working as a radiology porter at Basingstoke and North Hampshire Hospital and explained that Project Choice seemed like a perfect fit as he was feeling unsure about the idea of leaving college, but full time employment seemed like a daunting prospect.

Kieran said: “I am really enjoying meeting new people and feeling like I can help them. There is so much I have already learnt and this job has given me a real insight into what hospitals are like – there are lots of areas I’d never thought of or knew about.”

Hayley Connoley, performance manager for radiology, got the department involved in the Trust-wide programme by taking on two interns, including Kieran. She said: “Project choice is a great way to encourage young people who may have struggled in other areas to really build confidence and fundamental skills that they can apply to a workplace.

“The whole department has really embraced Project Choice and we are so proud of how our two interns are progressing in such a short time. Kieran is already part of the team. His personality shines through and we know both of our radiology interns have so much to give.”

Kieran added: “I would definitely encourage other people to do this. You can meet lots of new friends and maybe even work colleagues. If you like helping people then working in a hospital is the best place to be.”

Staff involved with the Project Choice interns have been provided with a development opportunity of becoming mentors. Marisa Murphy, radiology department assistant lead, has undertaken mentor training and is now supporting the two interns in the department.

Marisa, whose background is in working with people with learning disabilities, said: “It’s really exciting to have them on board. Not only is this a fantastic opportunity for young people, but we have so much to gain as a department and a Trust, too. There are already learnings we are taking forward as a team and it’s wonderful to see them thrive. The whole team is behind them and they have added a real buzz to the department.”

Alex Whitfield, chief executive of Hampshire Hospitals, which runs hospitals in Andover, Basingstoke and Winchester, said: “We are delighted to be able to offer placements to a group of young people who have so much to offer but sometimes find it difficult to realise their potential.

“By working with them through Project Choice we hope that we can help them to develop. At the same time our Trust will benefit through the raised awareness of people with learning difficulties and by members of staff receiving special training as part of the programme.

“The NHS is a diverse organisation and we are delighted to welcome these new members of the team to help us deliver outstanding care to patients, whether they are assisting our staff in the discharge lounge or supporting the maintenance of our hospitals.”

Interns will have up to three placements during their time with the Trust, working with Hampshire Hospitals teams for four days each week during academic term times. They will spend the fifth day of each week learning about work skills and improving their maths and English.