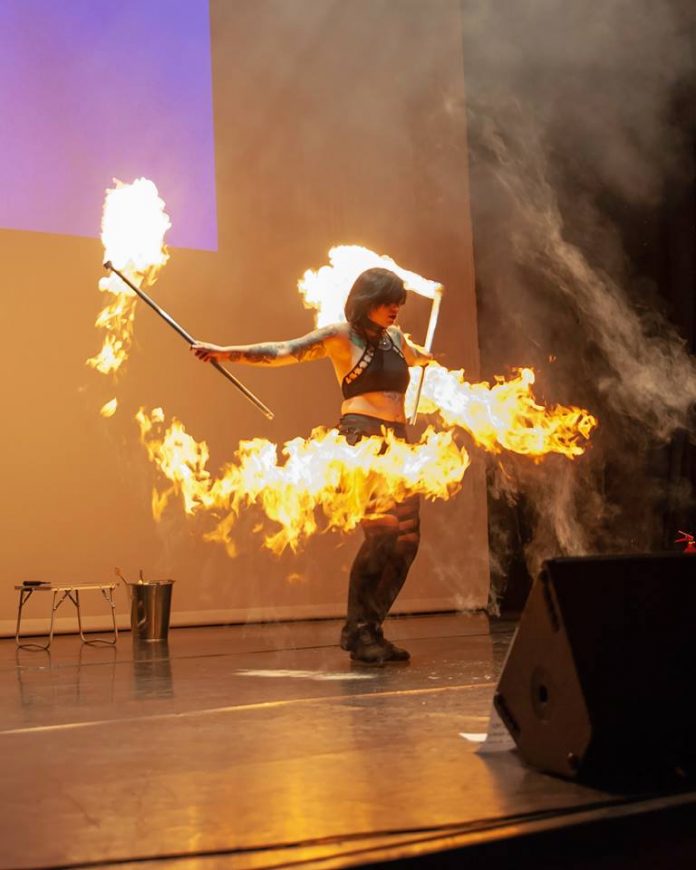 STAFF from a range of departments across Hampshire Hospitals NHS Foundation Trust came together to showcase their incredible talents in the first HHFT’s Got Talent.

15 acts from across the Trust battled their nerves to perform at Theatre Royal Winchester to impress a live audience and judging panel. Just some of the talents showcased included an aerial acrobat, pianists, singers and dance groups.

They had the hard task of picking their winner alongside the fifth judge, the live audience, who also had their chance to vote for their favourite performance.

Terry Watkins, lead sonographer at the Trust not only won the judges’ vote but also captured the hearts of the audience, winning 48% of the vote with his rendition of the song ‘Don’t Let the Sun Go Down on Me’.

The judge’s runner up was Jude Davison, head of education and workforce who entertained with his guitar and third place was awarded to bank staff member Kristy Cullum who lit up the stage with her fire skills.

The Mantons Band, which is made up of professors and doctors at the Trust, including chief medical officer Dr Andrew Bishop, entertained the crowd at various points in the evening and comedian Adger Brown hosted the show and had everyone laughing.

Winner Terry Watkins said: “It was such an amazing experience to be a part of – from the rehearsals to the live show there was a real comradery between all of the staff involved both on and off the stage.

“My team encouraged me to audition after hearing me sing at a Christmas party a couple of years ago but I haven’t sung in front of a big audience for about 15 years, when I took part in a competition.

“I have never won anything before so it was a big surprise on the night and a bit overwhelming, especially because the standard was so high and all of the acts were brilliant. I was honoured to have received the judges’ vote but winning the audience vote really meant the most to me because the audience was made up of my colleagues and peers.

“I was nervous in the lead up but luckily I was working so that helped to keep my mind off it until the evening! Once I got nearer to my time to perform and I could see the other acts so excited coming off the stage I was really excited to get going.”

Terry, who wrote lyric prompts on his hand to combat the nerves, also wanted to praise the incredible work of the staff team behind the show who worked tirelessly to put it together outside of their usual roles. He said: “Sharon Watson and the whole team did a fantastic job, so much work goes into putting something like this together – they are the real stars of the show!”

Alex Whitfield, chief executive of Hampshire Hospitals, which runs Andover War Memorial Hospital, Basingstoke and North Hampshire Hospital and Royal Hampshire County Hospital in Winchester, said: “We have an impressive team here and it was absolutely amazing to see they are as talented outside of work as they are within our hospitals caring for patients. It was a fantastic evening which really showcased the diversity of our staff and picking just one winner was difficult!

“As well as raising all important funds for Winchester Hospice, it was a real opportunity for staff to come together and celebrate each other in this special 70th anniversary year of the NHS. Some of the staff involved, whether behind the scenes or on the stage, may never have had the opportunity to work together within their professional roles so seeing them support each other in rehearsals and on the day was wonderful.”

A dazzling £227 was raised on the night from donations to Winchester Hospice and a final total will be announced shortly combining on the night donations and the profits of ticket sales.

Over £2.5 million needs to be raised in order to convert Burrell House on the site of Royal Hampshire County Hospital into Winchester Hospice – a 10-bed hospice supporting patients with life limiting illnesses and their families.

Thanks to the roaring success, with nearly a full house of entertained audience members, planning for HHFT’s Got Talent 2019 is already underway.