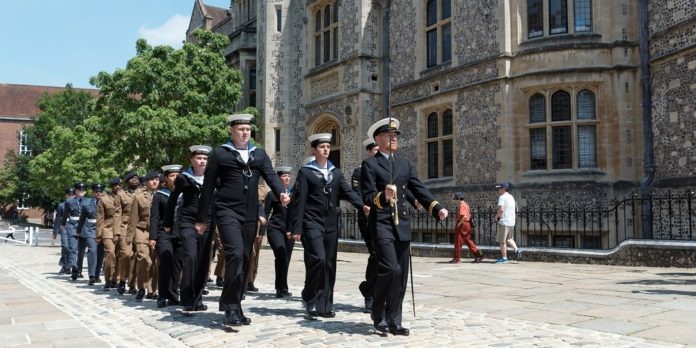 Personnel from the Royal Navy, Army and Royal Air Force will be taking part in the ceremony, which will culminate in the raising of the Armed Forces Flag outside the Great Hall. The flag will be flown until sunset on Sunday 30 June.

The Lord-Lieutenant said: “I look forward to welcoming a contingent of our serving personnel to Winchester for the annual Flag Raising Ceremony. This is a demonstration of Hampshire’s strong commitment to the Armed Forces community and I hope the public will show their support and appreciation by attending the ceremony.”

Hampshire County Council’s Armed Forces Champion, Councillor Andrew Joy, added: “We place enormous value on our close relationship with our military services, and the raising of the Armed Forces Flag in Winchester is a display of our unwavering support for our Armed Forces communities.

“Hampshire is home to over 20,000 serving members, as well as the largest concentration of veterans in the UK. Members of our Armed Forces have shown their commitment to public service – it’s only right that we show our appreciation.”

Members of the public are invited to begin assembling outside the Great Hall in Winchester from 12.30pm. The ceremony will start at 12.45pm and will involve the blessing of the Armed Forces flag by the Very Reverend Catherine Ogle, Dean of Winchester, before it is raised on the flagpole.

The Right Worshipful, the Mayor of Winchester, Councillor Eleanor Bell, said: “I am delighted to be joining with Hampshire County Council to honour our Armed Forces community. They play an important role in supporting and protecting our country and it’s important this is recognised.