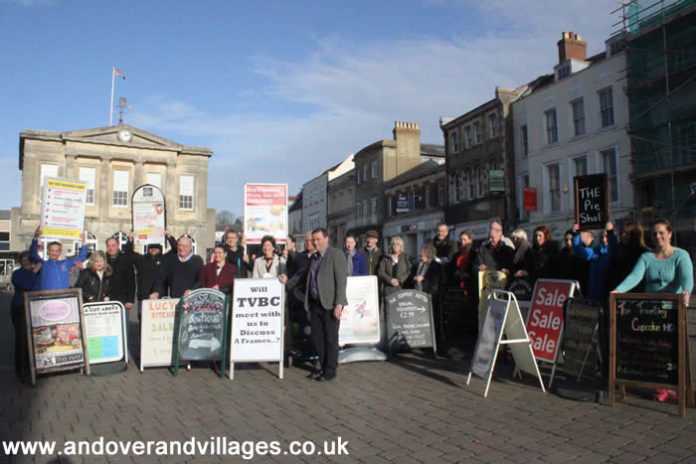 Hampshire County Council have, today, confiscated A-Boards from Andover’s town centre on their clamp down of illegal advertising on the highway.

Hampshire County Council have stayed true to their ‘no tolerance’ stance on advertising on the highway with Union Street’s Heavenly Sweets having their board confiscated today, along with three others out of the forty-six that were warned late last year, incurring a £33 fine and a weekly £10 storage fine.

One board was confiscated from the High Street, and the other three were removed from Bridge Street.

Speaking to Michelle from Heavenly Sweets, she said, “We removed our board this morning when we heard that a lorry was going around and taking the few that were left.

“It’s crazy. Small businesses need the boards to drive traffic through to them to survive. There are a few boards still out that they didn’t take, but it’s bureaucracy gone mad; it’s jobsworths taking things too far.”

The Heavenly Sweets Facebook Page wrote, “Scandal! – Mr Council has finally taken our a-boards away! Sources say they posed a real tripping hazard. So…will/won’t we get a fine? Will they send the heavies around? Will tomatoes be thrown?”

Following several complaints about the number of A-boards in Andover, Hampshire County Council visited all the businesses concerned (46) and either spoke to them or provided them with information about removing their A-board from the high street as it contravened the Highways Act. Only nine complied so formal notices were issued to the remaining businesses in December.

The enforcement notices that were issued are in line with Section 143 of the Highways Act 1980, which gives the County Council, in its capacity as the Highway Authority, the power to remove the A-boards and recover the costs of doing so.

The businesses that had their A-boards removed will now have to pay the County Council £33 plus £10 a week for the cost of its removal and storage.

Hampshire County Council’s Executive Member for Economy, Transport and Environment, Councillor Seán Woodward, said: ”It is regrettable that we have had to take this action but traders have had more than enough time and warning to remove their A-boards from the high street. While I am sympathetic to businesses needing to advertise, when an increasing number of A-boards are put out in a busy pedestrian area, it impacts on people’s ability to move freely about the town giving rise to complaints and that’s why we requested their removal. A-boards cause particular difficulties for pedestrians with sight or mobility problems, and for people with pushchairs who can find it difficult to manoeuvre around them safely. We need to balance supporting the local economy with making sure the footway is safe and there is enough room for everyone to use the high street without difficulty or worry.”