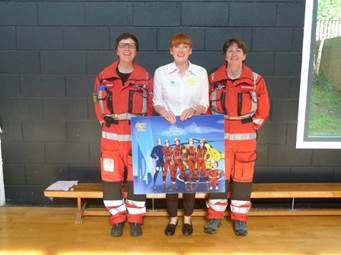 Hampshire and Isle of Wight Air Ambulance has been shortlisted for an Association of Air Ambulances Award of Excellence for its highly successful ‘Be a 999 Hero’ Education programme.

The Hampshire and Isle of Wight Air Ambulance ‘Be a 999 Hero’ education programme is designed to teach young people about how to respond in an emergency and to highlight the importance of the Air Ambulance and other emergency services. The programme has been popular with school children aged 5 – 11, and since its launch in October 2015, the charity has delivered its life saving message to over 20,000 children in schools, clubs and nurseries across Hampshire and the Isle of Wight.

At the forefront of the campaign are five super hero characters, inspired by the charity’s team of paramedics, doctors and pilots. The characters are featured on a new website (www.hiowaa.org/skyheroes56) specifically designed for young people, so that they can access vital safety information, fundraising ideas, games and a news page of activity from across the region. In addition, primary schools benefit from a 30 minute interactive presentation for pupils in class or assembly, plus a surprise visit from one of the charity’s three new mascots; Pilot Paws, Teddy Medic and Herocopter.

A survey released by Mumsnet in April last year found that of 757 respondents, 37% have not taught their child to dial 999, and many children thought that the emergency number was 911. Others commented that locked smartphones stuck on the ‘enter passcode’ screen were a source of concern.

‘No one wants to see their child put in the position of having to make a 999 call, but equipping our children with the necessary skills could save a life.’

The winners of the Air Ambulance Awards of Excellence will be revealed at an awards ceremony to be held on 14 November at the Millennium Gloucester Hotel in Kensington, London.

Hampshire and Isle of Wight Air Ambulance flies seven days a week and attends an average of two to three missions a day, many of them life saving. The charity receives no government, statutory or national lottery funding for routine operations, and is entirely dependent on donations received from members of the public, companies and grant-making bodies to keep the Air Ambulance flying and saving lives.