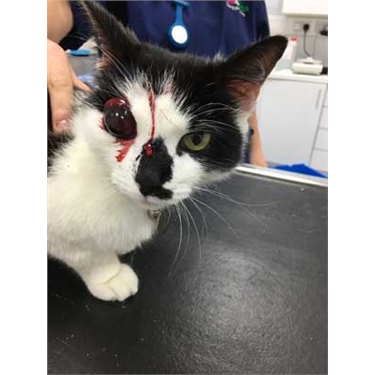 Cats Protection is urging the UK’s cat lovers to join a call on the Westminster government to introduce air gun licensing in England and Wales.

The government is currently holding a public consultation into air weapon regulation, including licensing, which closes on 6 February 2018, making this the ideal time for cat lovers to make their voices heardby sending an e-mail to the Home Office.

An analysis of UK press reports shows that three cats are killed or injured by an air gun each week and this is likely to be an underestimate because most attacks are never witnessed or reported. Over 90 per cent of these shootings take place in England and Wales where it is legal for anyone over 18 to purchase an air gun and ammunition without the need for a licence.

Victims of air gun shootings include Macy (pictured), a black and white cat from Rochdale who was shot in the eye last summer. Macy was found in a neighbouring garden and taken to the local Vets 4 Pets surgery.

“Macy’s injury was very upsetting to see – her eyeball was completely destroyed and needed to be removed,” says Amy Day who owns the surgery. “Macy thankfully recovered from the injury but it could have been so much worse. Shootings of cats and other animals are becoming much more common in our area.”

“Attacks like the one on Macy cause immense pain and suffering to cats as well as anguish for their owners and fear in their local communities for the safety of people and pets,” says Jacqui Cuff, Cats Protection’s Head of Advocacy & Government Relations.

“This is an unacceptable state of affairs and we want to see England and Wales follow the example of Scotland and Northern Ireland where it is illegal to own air weapons without a licence. Our monitoring of press reports has consistently shown fewest shootings of cats in Northern Ireland who were the first to introduce licensing of air guns and a decline in reports in Scotland since licensing came into force in January 2017.

“If licensing were introduced, we believe it would be easier to track down culprits who use these weapons to inflict harm on cats. We want to ensure that cats in England and Wales are fully protected. Those who have a legitimate reason to purchase, possess and use an air gun will be able to retain ownership and would simply need to apply for a licence.”

“Last year over 90,000 people signed an online and paper Cats Protection petition calling for the licensing of air guns in England and Wales, showing the depth of public feeling on the issue. Our hope is that as many people as possible email the government in support of air gun licensing so that we can make the whole of the UK a safer place for cats, animals and human beings.”

To take part people should visit www.cats.org.uk/airgunsconsultation where they can adapt and send the e-mail.

Cats Protection is the UK’s leading feline welfare charity and helps around 190,000 cats each year through a national network of over 250 volunteer-run branches and 34 centres. The charity’s vision is a world where every cat is treated with kindness and an understanding of its needs.