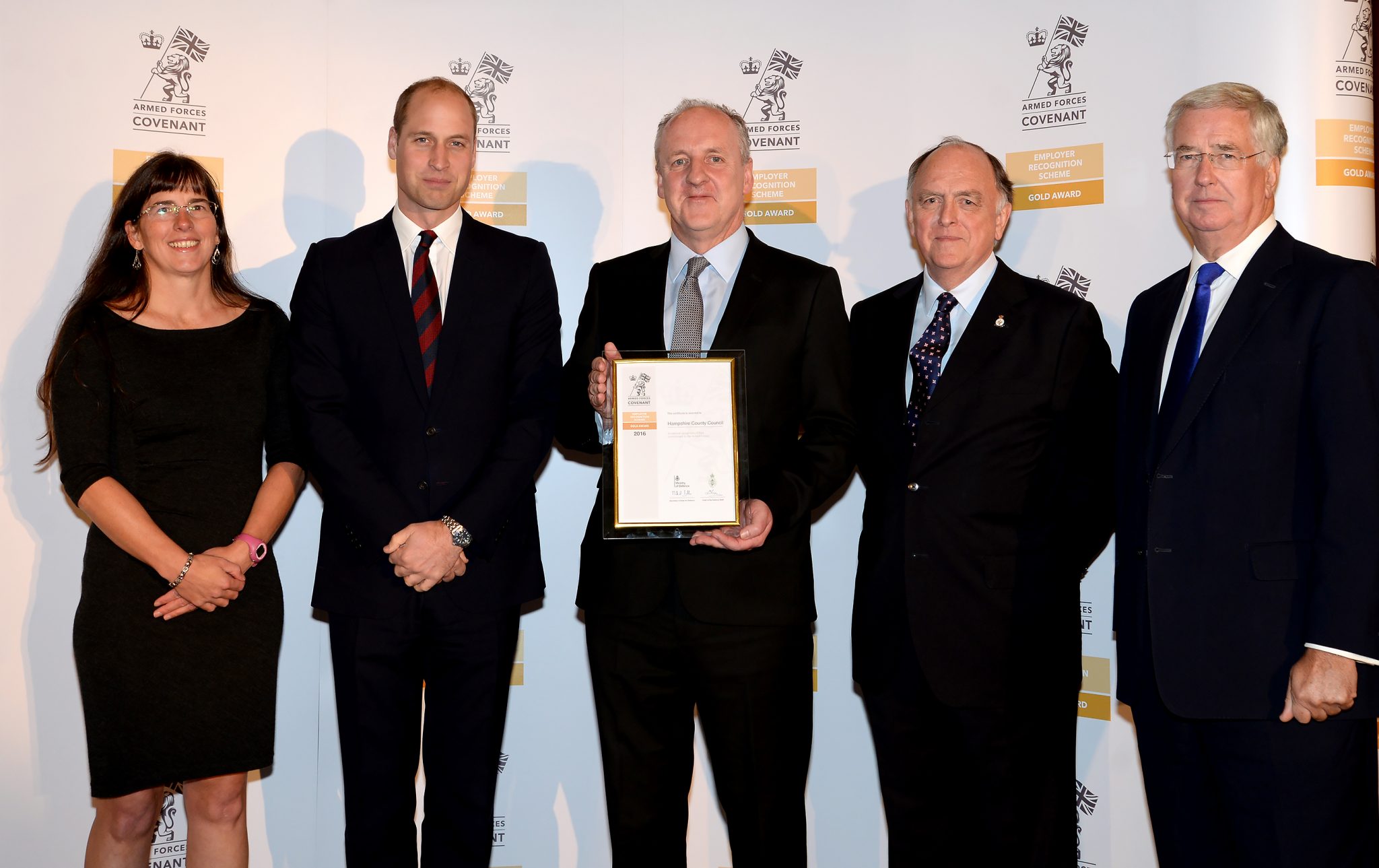 Hampshire County Council’s commitment to supporting the Armed Forces has been recognised with a Gold Award presented by His Royal Highness the Duke of Cambridge.

The Local Authority was one of only 22 organisations across the country to receive the award last night (12 Oct) from HRH Prince William and Defence Secretary Michael Fallon at the MOD Employer Recognition Scheme Gold Awards Ceremony at the Royal Hospital Chelsea in London.

The County Council has proudly supported Hampshire’s Armed Forces communities for many years and was one of the first local authorities to sign the Armed Forces Covenant and establish a strategic Civilian Military Partnership to ensure those who serve or have served, and their families, are treated fairly.

The Local Authority employs a number of ex-service personnel and reservists from the Royal Navy, the Army and Royal Air Force, with reservists entitled to two weeks additional paid leave for training and other duties. The County Council also recently built the ‘Poppy Pod’ camping village at Tile Barn Outdoor Centre in the New Forest to offer free respite for military families.

Councillor Roy Perry, the Leader of Hampshire County Council, said: “We place enormous value on our long and close relationship with the Armed Forces, with more than 85,000 military personnel, veterans, reservists and MOD civilian employees across Hampshire. The Poppy Pods and support for reservists are just two of many examples highlighting our commitment to give something back to those who have already given so much for this country. Receiving a Gold Award is also recognition that we go beyond pledging support as an employer and local authority, by becoming advocates and encouraging others to do likewise.”

Councillor Joy added: “It was an honour to represent the County Council and receive the Gold Award from the Duke of Cambridge. Few organisations across the country have received such recognition, and we are particularly proud of our ongoing commitment to employees linked to the Armed Forces. We enjoy a close working relationship with our Army colleagues of 11 Brigade and with RAF Odiham. We have established an excellent and rewarding partnership with HMS King Alfred in Portsmouth, helping one of the largest naval reserve training centres in the country to exceed its recruitment targets and revitalise the Naval Reserve Forces. We will continue to do as much as we can to support them all.”

Councillors and officers have championed a number of other military supporting projects and policies including promotion of civil events such as Armed Forces Day and free or discounted entry for serving or ex service members to the Council’s attractions. On 21 November, the County Council will also host an event for service leavers and their partners/spouses to make them aware of career opportunities at the local authority.

For more details on the County Council’s strong links with the Armed Forces visit www.hants.gov.uk/armed-forces