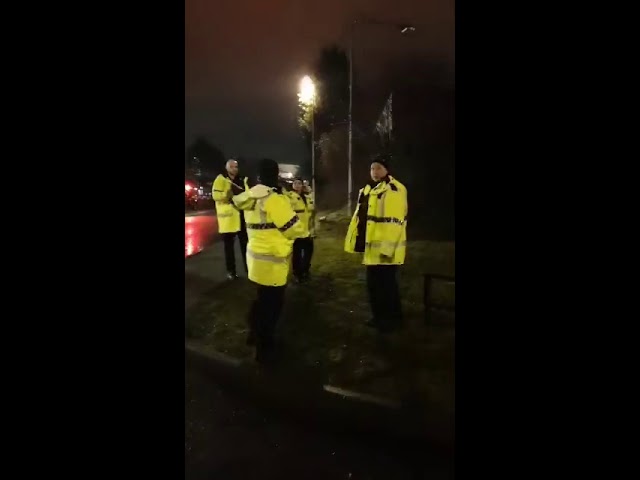 Andover Radio Founder and Director David Harber and Community Development Director Mo Sweeney attended the fire in order to report on it. They were asked to move back as police attempted to place a cordon a safe distance from the growing dangerous fire so that the fire service could continue to keep the fire under control and to stop it spreading.

The duo were filming a Live Facebook video of the scene and were asked to move back away to the end of the street or to go home, Sweeney can be heard to slur to his colleague, “We don’t want to get arrested.” The police attempt to escort the men and told them that they will be able to read about the incident on the news the following day, Harber responds, “I AM the News”. The police officer says, “You are very drunk and obstructive and you need to move.”

David Harbour later tells Radio Today that he was prejudiced by police. David Harber adds: “We were singled out by Police, as other bystanders with cameras were permitted to stay.”

Sweeney is heard on the video to say ‘I want a f***ing fag before we move to the end of the street” and goes on to say, “We are going to expose them.”

After this, the duo appears to comply with the officers and say they understand why they are being moved, but then continue to argue with them.

As the female police officer repeatedly asks them to move back, the duo can be heard to constantly bicker and question her, the officer can be heard to turn on her BWV (Body Worn Video) as the conversation progresses, she asks what news agency they work for, Harber quipped ‘Sky News’ and then after a pause said, “but I work for Andover Radio”.

Sky News told Andover and Villages, “This is totally incorrect. We didn’t have any reporters on site to cover the story.”

As Harber records the officers, Sweeney takes photos of the exchange.

Several discussions between the police and the Andover Radio employees take place, at one point Harber accuses the officers of pushing him into the street.

Hampshire Police told Andover & Villages this morning, “No arrests were made. The individuals were spoken to at the scene. We are looking into the matter.”

Hampshire Fire and Rescue have declared the fire as a ‘major incident’ but have said that the fire is under control. Four firefighters were treated for smoke inhalation as a result of the fire.

For the latest Andover news visit our homepage

It is not yet clear what will happen to the employees of the Andover distribution centre, it is a very worrying time for everyone involved.

Later this afternoon (6th February 2019), following the publication of the Andover and Villages coverage, David Harper released an apology, stating, ‘Sometimes decisions are made that are simply wrong, situations go awry and we do things we later regret.  Especially when these decisions are made under the influence of alcohol.’

They have apologised to Hampshire Constabulary for their behaviour in their article.

The police officer can be heard to say, “You are obstructing me now, because I am needed elsewhere.”

Harber: You keep telling me I am obstructing you.

Officer: Yes you are, you are intoxicated…

Sweeney: We haven’t had a drink

Officer: You have had several drinks

Sweeney: thats a fair one.

Harber: Of course I can film you can’t I?

Officer: I am filming you as well.. for…I’ll be putting in… even your colleague has said..

Harber: The crime I am committing is..

Officer: Obstructing a police officer in the course of their duty.

Harber: I don’t think I am, I’ve got a video here of me walking backwards behind you doing what you’ve asked me to do. The fact is you are being aggressive to me.

Officer: I am not being aggressive to you.

Harber: Well you sort of are.

Officer: I’m not going to argue with you.

The live video then jumps to filming the officers putting in place police tape at a cordon before the duo are asked to move away again.

Officer: Sir can you please move behind the lines. This is ridiculous, just move back please sir. You are being obstructive and you are putting everyone else’s safety at risk because we are looking after you rather than just being able to keep everyone safe. So please stop being obstructive. Its very selfish of you.

A taxi is in the way of the officer being able to put the tape across the road, he identifies himself as being there to collect the Andover Radio employees.

Officer: Right, In your taxi and home.

Harber: Its very unlikely isn’t it?

Officer to taxi driver: Can you just take them home?

Officer: Sir you are being really obstructive and are putting other people’s lives at risk. You are obstructing two police officers who need to be elsewhere…off the street.

Sweeney: All I am saying is we are behind the lines now..

Officer: But you have been obstructive. Just go. Just go for your own safety.

Officer: It is going to be at the end of that road in a minute.

Sweeney: you tell me where the line is.

Sweeney: If you want to arrest me, arrest me.

Officer: I don’t want to because I am needed other places, but I will arrest you

Sweeney: What I’m saying to you…

Officer: See down there, see down the end of that road?

Officer: Highways Agency are coming out and they have been posted down there. So thats where you need to go.

Sweeney: That’s a fair one. What I’m, saying to you…

Officer: I haven’t got the resources right now because I am dealing with you. Alright, thats the deal.

The officer uses her radio and says: Can you please pop on the log, I am with two very obstructive males from Andover Radio, they are both intoxicated…

Sweeney talks over the officer: My name is Maurice Sweeney.

Officer: …refusing to move, just taken me ten minutes to get them to….

Sweeney: Hey Dave, got a light?