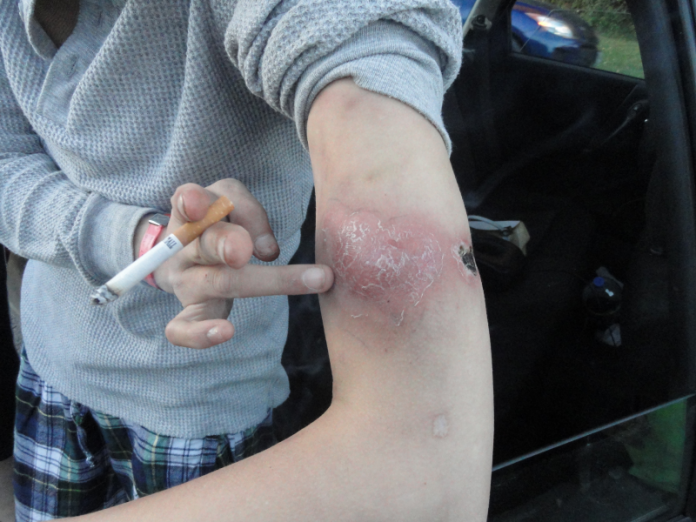 The effects of a horrific flesh-eating drug have been revealed in these horrific images.

“Russia’s deadliest drug” otherwise known as Krokodil has already claimed hundreds of thousands of lives across the world. Russia is the worlds biggest user of Heroin following the collapse of the Soviet Union.

It has been claimed that 20% of Russia is addicted to heroin – and now it’s appeared in the UK.

It is also known as “Russian Magic”

Desomorphine is the chemical structure of Krokodil which is commonly found in heroin.

The name “Krokodile” came from its flesh-rotting property causing the skin to melt, becoming scaly almost like a crocodile.

The opiate when injected ruptures blood vessels and causes the skin to further rot away and turn into a green and crusty scale.

The opiate can be made from homemade items and just costs a couple of pounds and creates a similar effect of heroin.

The dangerous opiate can affect the addict’s life expectancy and minimise it to little over two years.

Polly Mayweather - Friday, June 16, 2017
Police are appealing for information regarding a burglary which occurred in Tidworth. At some point between 9:30 am on Tuesday 13 June 2017 and...