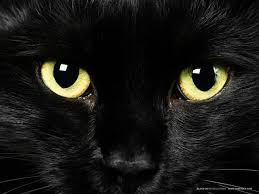 Research by a national cat charity indicates that people who say they like black cats soon change their mind when they view pictures of them.

In a survey of 2,000 members of the public by Cats Protection, more than 70 per cent said they wouldn’t have a favourite colour if they chose to adopt a cat.

However when 1,000 respondents in another sample were shown a black cat, a tabby cat and a ginger cat in neutral poses and asked to assess their personality the black cat was viewed less favourably, being seen as less playful, friendly, vocal and attention-seeking than the tabby or ginger cat which typically find homes much faster.

Cats Protection says the findings help to explain its current adoption crisis with black and black-and-white cats, which make up half of all of the cats in the charity’s care and take longer to be adopted than the average.

The charity is holding a National Black Cat Day on Friday 27 October to champion the cause of the forgotten black cat.

“The survey findings suggest prospective cat owners are affected by a colour preference even when they say they aren’t, says Gemma Croker, organiser of National Black Cat Day.

“Respondents indicated that a black cat was less exciting than a tabby or ginger though in truth looks don’t decide personality and there are plenty of characterful, fun-loving and cheeky black cats who would really light up a home.

“We think that people are aware that black and black-and-white is the most commonly seen colour among the cat population, and hence they are more inclined to go for the tabbies, gingers and other bright-coloured cats who are in the minority and look more exciting to adopt.

“It’s not uncommon for many monochrome moggies to wait many weeks or months to be adopted which is why we are holding our Black Cat Day on our social media sites on Friday 27 October. We want to change people’s perceptions and help as many cats as possible into new homes!”

This year’s National Black Cat Day is about how black cats are “superheroes” to their owners and the charity is holding a competition to find the most heroic among them.

To take part, simply tweet @CatsProtection on Twitter with a photo of your black or black-and-white cat, briefly explain why they are a hero, and attach the hashtag #MyBlackCatHero and #BlackCatDay. You can also enter via Instagram using the hashtags or by visiting www.cats.org.uk/black-cats

The best photos will be featured on Cats Protection’s social media sites on Friday 27 October with the winner receiving a prize package including an exclusive National Black Cat Day drawing by Simon’s Cat creator Simon Tofield and two tickets to Cats Protection’s National Cat Awards at The Savoy in August next year. Six runners-up will receive goody bags. For more information visit www.cats.org.uk/black-cats

Cats Protection is the UK’s leading cat welfare charity and helps around 500 cats a day – or 190,000 cats and kittens each year – through a national network of over 250 volunteer-run branches and 34 centres. The charity’s vision is a world where every cat is treated with kindness and an understanding of its needs.

To view black or black-and-white cats in need of homes in your area, please visit http://www.cats.org.uk/find-a-cat