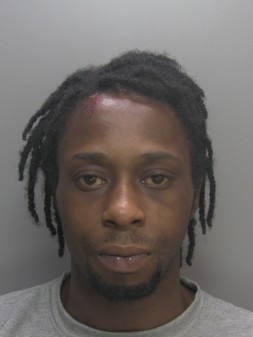 An armed drug dealer who attempted to ram into a police car as he tried to evade arrest has been jailed for 12 and a half years.

David Afolabi, 28, of Gibbon Road, London, thought he could flee from officers when they attempted to pull his car over in Basingstoke in September.

Knowing he was carrying a firearm with ammunition and a quantity of Class A and B, he failed to stop but was soon involved in a collision which forced him to flee on foot.

Despite his attempts to escape by jumping over fences he was caught by officers and arrested.

Officers pursued his car and at one point Afolabi went into reverse in a bid to ram the police car, which proved unsuccessful.

Within two minutes he had collided with a white Fiesta on Aldermaston Road and fled the scene on foot.

Officers were able to catch up with him though and he was arrested.

The court was told that a firearm was also recovered from the scene. Tests later confirmed that the firearm was viable and contained three rounds of ammunition.

The court was told how police tried to stop a Vauxhall Insignia being driven by Afolabi but he failed to stop.

A short time later the car was in collision with a Vauxhall Corsa causing Afolabi to flee on foot.

Officers chased him and he was arrested.

Yesterday he was sentenced to a total of 12 and a half years in jail.

DC Drew Wright said: “I hope this sentencing reassures residents in Basingstoke that a dangerous driver and drug dealer has been taken off our streets.

“It is clear from what happened that Afolabi didn’t care whose lives he put at risk, he only cared about himself and would do whatever he could to escape justice.

“Thanks to the officers who spotted his car and persisted in capturing him, a live firearm is no longer within our community.”

He added: “As you can see from the footage Afolabi put the lives of many motorists and pedestrians at risk.

“The speed he travelled at around residential streets and the hospital estate was reckless and showed a total disregard for other members of the community. It is only sheer luck that nobody was seriously injured.”