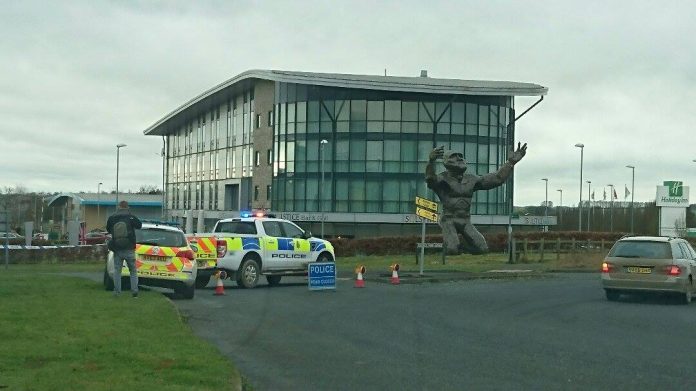 Wiltshire Police and the Bomb Disposal Unit descended on Solstice Park in Amesbury this afternoon, at around 3.00pm. (Tuesday 21st February 2017).

Part of Solstice Park has been cordoned off, including the services area, McDonald’s, KFC, Pizza Hut and Costa Coffee among others.

Drivers and their vehicles have been evacuated from the busy retail park.

An eye witness told Andover & Villages, “We were evacuated from the area and now we can’t get back in.”

Another eye witness said, “You can’t get anywhere near the services or home depot.”

The public is advised to avoid the area.

Amesbury Police have said on their social media accounts, “Solstice Services on the A303 are closed whilst we deal with an incident.”

Wiltshire Police have said, “We are currently dealing with an incident at Solstice Park – we received a call reporting a suspicious phone call to premises at the location. As a precaution, a number of businesses at the park have evacuated and a cordon is in place.

“We advise that you avoid the area until further notice.”