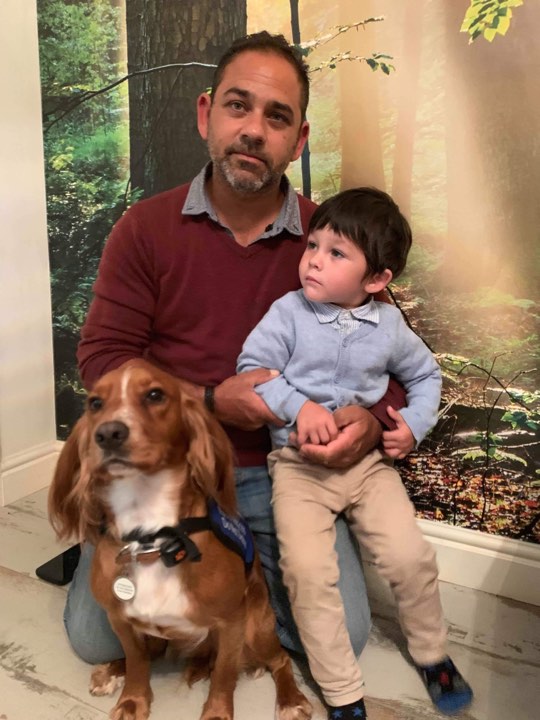 A Weyhill family have been left feeling humiliated, angry and upset this week after a visit to their local Texaco Garage.

Karsten Bulner visited Weyhill’s Texaco Garage on Sunday 29th September 2019 with his 3-year-old son Leon (or Mancub as friends and family call him) and his assistance dog, Fern, in order to pick up a few grocery items.

Fern is a cocker spaniel who has been trained specifically to help Leon with his meltdowns due to his Autism. In September 2018, Leon went through Neuro Surgery because of having an incurable Chiari Malformation, he also has a feeding tube directly into his stomach.

“Not only was I made to feel uncomfortable being asked to remove the dog, but also embarrassed and humiliated as other members of the public were also present paying for there fuel and other items.”

Karsten decided not to pursue the matter there and then as Leon was with him and he also needed to go home in order to feed him.

The following day, Karsten returned to the store to speak to the manager, armed with his mobile phone recording the interaction, the manager told Karsten that only guide dogs for blind people were allowed into the shop, because there was food in there.

Karsten challenged this and points out the manager’s actions are a breach of the Equality Act 2010 and that he was within his rights to contact the police, the manager encouraged him to do so if he wished.

Karsten told Andover and Villages, “I am furious.

“I’ve got to make people aware that this is still happening! Not just to me but to a lot of others.”

Texaco UK told Andover and Villages, “This is not something we would get involved in, you would need to speak to the garage owner.”

A spokesperson from Londis told Andover & Villages, “We are sorry to hear about this incident. All Londis stores are independently owned and therefore we have no operational control. However, we will pick up with the retailer directly to advise him of the complaint.”

Assistance Dogs Uk said, “It is against the law for service providers to treat people with disabilities less favourably because of their disability, or because they have a guide or assistance dog with them.

“Making “reasonable adjustments” might mean giving extra help, such as guiding someone to a restaurant table, or making some changes to the way you provide your services to make it easier for blind and partially-sighted people to use them. It certainly includes allowing guide dogs and assistance dogs into all public places with their owners.

“Guide dog and assistance dog owners have important rights under the Equality Act 2010. The EA provides for disabled people to have the same right to services supplied by shops, banks, hotels, libraries, pubs, taxis and restaurants as everyone else.”

Andover and Villages spoke directly to the Area Manager of JP&S Services Limited who own the Texaco Garage in Weyhill, he said; “I absolutely cannot defend the actions of the staff in the Weyhill store. We have launched a full investigation and all staff will be given full training in order to ensure that a mistake like this is not made again.

“We have emailed and apologised to Mr Bulner and asked him to meet with us so that we can apologise in person.”

Gabriel Ingram - Monday, October 8, 2018
Andover police are appealing for witnesses as part of an investigation into a sexual assault in Andover. Sometime between 3am and 3.30am on Sunday 30...