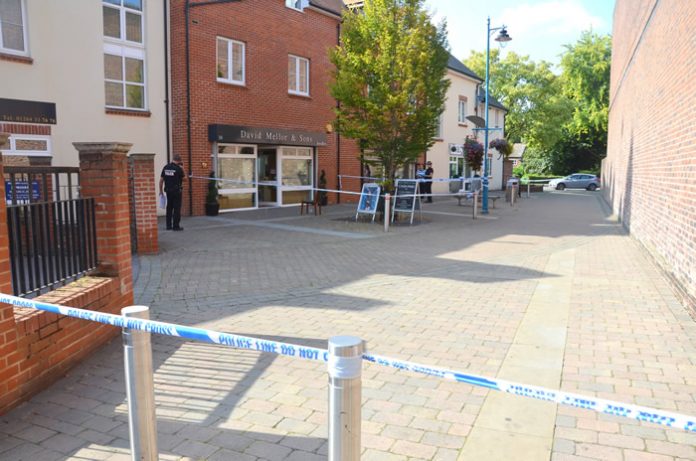 0
SHARES
ShareTweet
Detectives investigating an armed robbery at a jewellery store in Andover yesterday (Wednesday, September 10) are appealing to the public to help find those responsible.
At 10:01 yesterday morning, police were called by staff at David Mellors & Sons jewellers after the store was raided.
Witnesses have described seeing two people on a motorbike pull into Waterloo Court from Wellington Road. The motorbike did a u-turn, during which the pillion passenger jumped from the bike and ran into the jewellers, where he or she proceeded to smash the glass cabinets with a hammer.
The shop manager tackled the robber, who immediately fled the shop.  The suspect got back onto the motorbike and the pair fled the scene towards Wellington Road, where it turned right and out of sight.
Officers believe that the incident may be linked to two suspicious men who were seen paying particular attention to the same store on Monday morning (September 8).
Detective Inspector Justin Torgout, leading the investigation, said:
“We have every reason to believe that the two men seen on Monday are linked to those who carried out this robbery yesterday.
“The shop manager was extremely brave in tackling the robber, and it is only a matter of luck that nobody was hurt.
“We are doing everything we can to find these people and urge anyone who saw two people on one motorbike in and around Andover town centre at around 10am yesterday morning to please contact us.
“We’d also like people to cast their minds back to Monday. Were you in the town centre between 11:30 and midday?  Did you see two men acting suspiciously near David Mellors jewellery store or riding on one motorbike? If so, please call us now as any information you can give us is really valuable.”
The two suspects seen checking out the jewellers on Monday are described as white and both in their late twenties or early thirties.
One had a large build and was wearing a dark coloured t-shirt, grey shorts and white shoes.  The other man was wearing a white sun hat, a blue long-sleeved shirt, dark shorts and Nike-branded trainers. He had a short dark beard.
Anyone with information should call 101 and ask for Basingstoke CID. Alternatively, information can be left anonymously by calling Crimestoppers on 0800 555 111