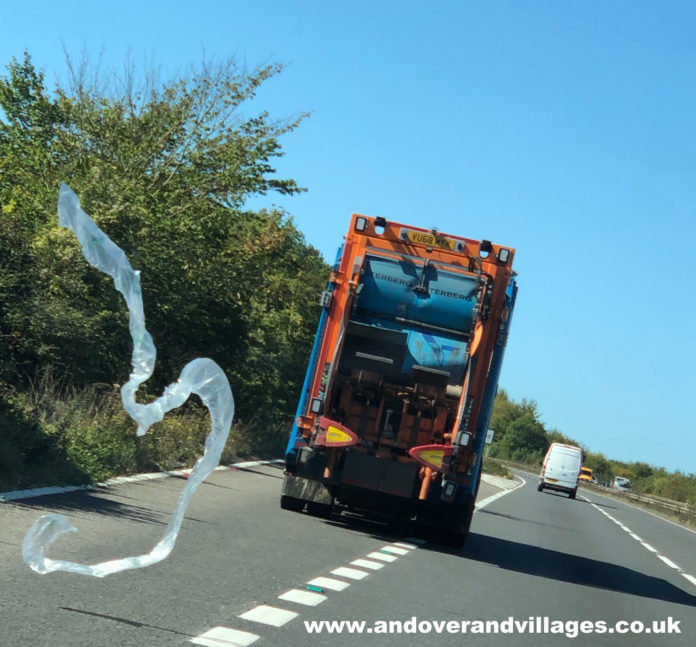 A couple following the lorry along the A303 from Longparish to Andover were showered with rubbish from the back of the ‘Recycling Stars’ branded lorry.

The couple describes the deposits as ‘substantial’ and that as debris flew out of the back of the truck, despite being at a reasonable distance behind, the rubbish hit the windscreen of the car they were travelling in.

The Government’s ‘Waste duty of care: code of practice’, which the Environment Agency confirm applies to local councils, states that waste carriers must ensure vehicles are covered and that waste is secured appropriately for transport purposes, if this is breached, it is a criminal offence. If the carrier does not take all reasonable measures available to meet their duty of care, the carrier could face prosecution and, on conviction, a fine and criminal record.

One of the witnesses told Andover & Villages, “My husband and I were driving into Andover and we were behind a TVBC dustbin lorry and were immediately showered with various bits of recycling type rubbish, there were McDonald’s brown bags, bits of paper, card, plastic and all sorts hitting the windscreen.

“It was really dangerous as the rubbish was hitting my husband’s car, luckily nothing heavy flew out but if it had been something larger that stuck to his windscreen, we could’ve been in trouble.”

Andover and Villages spoke to Test Valley Borough Council to ask how this kind of incident could happen, they would not respond until they had seen a picture of the incident.

Three days later, after being chased several times for comment, AaV received the following response from the portfolio holder for environmental services, Councillor Alison Johnston; “We haven’t seen the video footage but we are of course very sorry if a piece of plastic did come from the back of one of our trucks. The council’s collection vehicles carry waste securely and apart from extremely rare occasions waste would not escape.

“We try our best to make sure this does not happen and operatives regularly clean any loose waste from the back of the vehicle before going to or leaving the transfer station. Drivers also ensure the apparatus is clear of waste before setting off.”

Andover & Villages was very clear that it was not only one piece of plastic that escaped the back of the lorry, and reiterated this information after receiving the above comment.