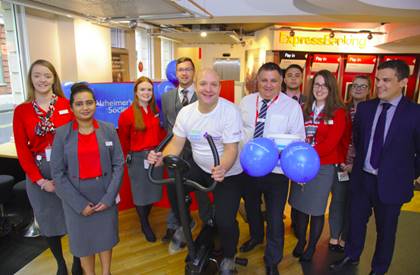 Staff from a HSBC branch in Andover have been raising money for Alzheimer’s Society by cycling 16 hours across two days. Along with 14 other HSBC branches across the south, static bikes located within the Hampshire branch provided the ultimate endurance test as part of HSBC’s ‘Road to Birmingham’ challenge, raising money for team south.

The Road to Birmingham is an HSBC UK-wide fundraising initiative which today saw four teams of cyclists depart from four corners of the UK, cycling across the country, all the way to Birmingham – the new home of HSBC UK.

The south team, led by Rebecca Rush, HSBC Area Director in Wiltshire, set off from London on 25th September and began cycling the 145 miles from London to Birmingham.

With a huge overall target of £10,000 to raise, team lead Rebecca gathered her retail colleagues across the south with an idea to help raise much needed funds. Branches across Somerset, Dorset and Wiltshire took on their own cycling challenge, cycling for 16 hours across two days on static bikes located within branches.

Rebecca said: “Our cycling team has taken on an exceptional challenge and colleagues across the south have been keen to support the fundraising efforts.

“Alzheimer’s Society is extremely close to my heart as my own family has been personally affected by the disease. Teams across the south have been instrumental in ensuring we reach our overall goal of £10,000 as have the generous customers who have been donating in branches.”

The south team are due to reach the final leg of their challenge on 26th September, when they will arrive in Birmingham, meeting with teams from HSBC in Scotland, the north and west.

Luke Harper, head of HSBC UK’s partnership with British Cycling, said: “Our partnership with British Cycling is about getting people on their bike, whether it is for travel, fitness or leisure, and the Road To Birmingham provides HSBC colleagues with a bit more of a challenge, raising a significant amount of money for charity in the process. The inspiring fundraising undertaken by the team is a wonderful example of how cycling can both bring people together and raise awareness of a worthy cause.”

For more information and to donate, visit: https://www.britishcycling.org.uk/news/article/20170714-Road-to-Birmingham-2017-0