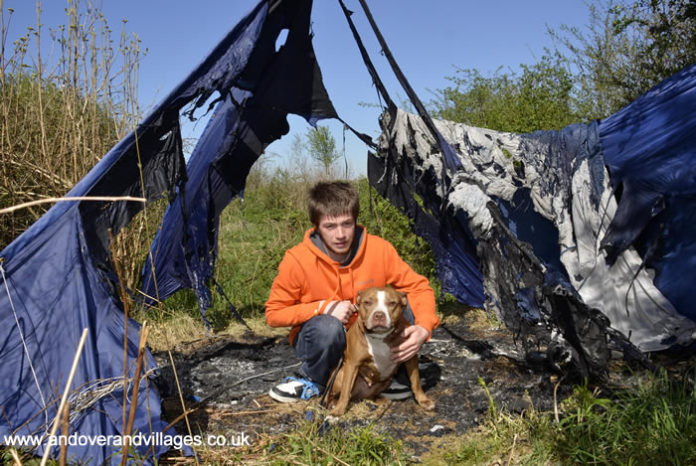 Andover & Villages reported this week on the plight of Daniel, after someone set fire to the tent he was living in, luckily he was not in the tent at the time but the fire destroyed all of Daniel’s possessions and more importantly, his only home.

Daniel is 21 years old and has had a troubled life. At the age of 16, he went to live in Sarum House because his family were struggling to cope with his alcohol and drug issues. After being evicted from the home for young people following an incident involving drink and drugs, Daniel ended up living here and there until finally, some months ago, he had to leave the squat he had been staying in to live in a tent.

Throughout the last year, Daniel’s companion was Chloe, an eight year old Staffordshire Bull Terrier who has had a similar unstable background to her devoted owner, prior to being in his care. It is because of this, re-homing Chloe is absolutely not an option for Daniel, who relies on her as much as she him.

Daniel told Andover & Villages, “I am completely clean now, I don’t do drugs or drink alcohol and I want to get a job, but its impossible while I am living in a tent.

“I just don’t know where to turn; I keep being told that to be homed, I can’t have a dog, but I just can’t get rid of Chloe – she is what keeps me going.

“I am so low and desperate that I just don’t want to be here any more. I just want to hurt myself.”

Daniel was donated a tent and sleeping bags from a well wisher, but has been too scared to set the tent up for fear of someone setting fire to it again. Another well wisher met Daniel in Andover Town Centre and bought him breakfast and topped up his mobile phone.

Local Green Party Borough Council Candidate, Dean Marriner saw Daniel’s plight on Andover & Villages and put together a crowd funding page, asking for donations to help Daniel in his time of need. Dean said, “No one wants to be living in a tent because they have no other choice. You certainly don’t expect to be turned away by the council in your moment of need.

“This fundraiser is a direct response to the support raised on-line and I hope we are all able to help, even in the short term, to give Daniel and his companion some dignity and the social justice he deserves. We need to send a message that society’s contribution can help achieve a solution for homelessness in Andover and beyond.”

You can donate funds to help Daniel by clicking on the following link – www.crowdfunder.co.uk/daniel-knight-1

All funds raised will be controlled by Dean Marriner to help Daniel and Chloe get back on their feet.