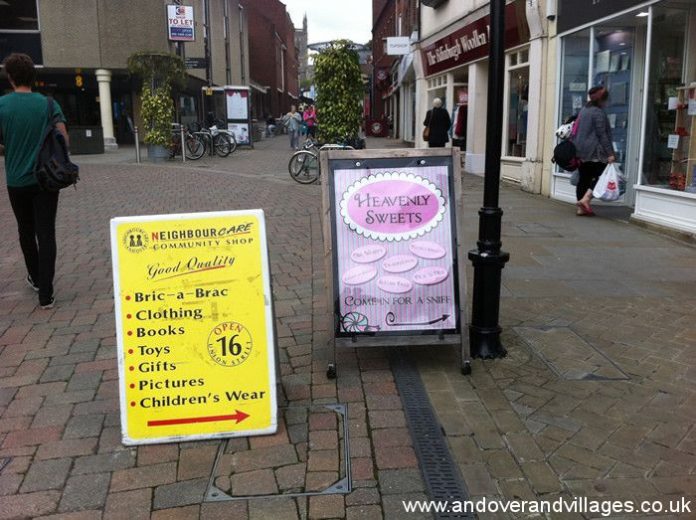 The issue of A-board advertising in Andover has come to the fore again. This time businesses under the direction of the County Council are required to remove their A-boards, because it is a criminal offence to obstruct the highway with advertising.

Shop owners are understandably dismayed by the loss of their, essentially, free advertising.

A local website run by a close paid associate of Cllr Hooke (UKIP), reported this week that Cllr Hooke had taken up the issue with officers from Hampshire County Council and that no further action would be taken against owners of the advertising boards. The headline states ‘A-Board Reprieve for Traders’, however, in a confusing turn of events HCC say they have no knowledge of this and that the initial letter delivered to businesses remains the policy of the Council.

The claims by Cllr Hooke have the potential to cause businesses a great deal of problems. Business owners have spoken to Andover & Villages and have expressed their confusion following Cllr Hooke publicly taking credit for ‘sorting the issue’, potentially leading to retailers facing legal action unnecessarily, if their advertising boards are not removed within the one month period given.

Councillor Seán Woodward (Conservative) issued a statement that dismissed Cllr Hooke’s claims, stating, “My original statement still stands. We endeavour to be reasonable, and have given businesses one month to remove their A-Boards from the public highway.”

In 2010 Borough Councillor Nigel Long (Lib Dem), whose ward covers the town centre, repeatedly raised the issue of Advertising Boards at meetings of the Andover Town Council. Excerpts of minutes from the meetings note that Cllr Long raised the issue at meetings in July, August and September of 2010.

However, in 2013 when the issue of advertising boards was last in the news, Cllr Long changed his position and defended the retailers who were using A-boards in a post on his blog, stating, “With shops closing at an alarming rate in our High Street, we need to help our local shops stay open and promote them as much as possible.”

Blocking a public highway is a criminal offence and it is up to local businesses, council members and officials to come up with a suitable means of advertising business locations, whilst avoiding the pitfalls of creating legal conflict.

Local retailers will no doubt retain their loyal customers, but will be hoping for a speedy resolution to the problem.

Andover Record Fair at The Lights 2019

Gabriel Ingram - Thursday, January 3, 2019
Once again, the record fair will return to the Lights in Andover. CD's and DVD's from dealers from across England will be on sale at...