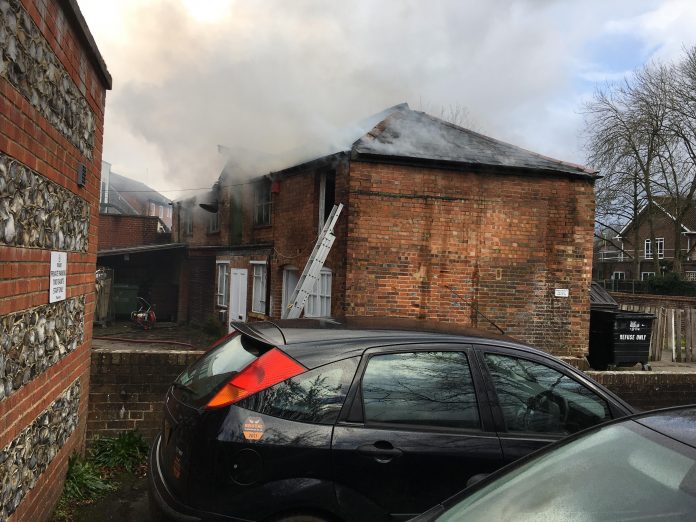 The storage area behind Dominos Pizza in Andover’s Bridge Street is on fire this afternoon (Thursday 18th January 2018).

The fire started shortly after lunchtime in the area to the rear of the building.

The fire service and police are in attendance.

All members of staff are safe and accounted for.

Bridge Street was gridlocked with traffic but has now been closed whilst fire crews put the fire out.

Drivers and pedestrians are advised to avoid the area until the situation is completely under control.

Hampshire Fire said; “Firefighters were called to a blaze in the outbuilding of a takeaway shop on Bridge Street in Andover earlier today (18 Jan).

“Crews from Andover, Winchester, Basingstoke, Eastleigh, Whitchurch and Dorset and Wiltshire Fire and Rescue Service were called at 13:36.

The two-storey outbuilding to the rear of the main shop suffered 100% damage to the first floor from the fire which was extinguished using five sets of breathing apparatus, two hose reel jets, one main jet and tactical ventilation for smoke clearance.

The stop message came in at 16:17 when our Fire Investigation team were called to the incident, with crews due to reinspect the scene later.”