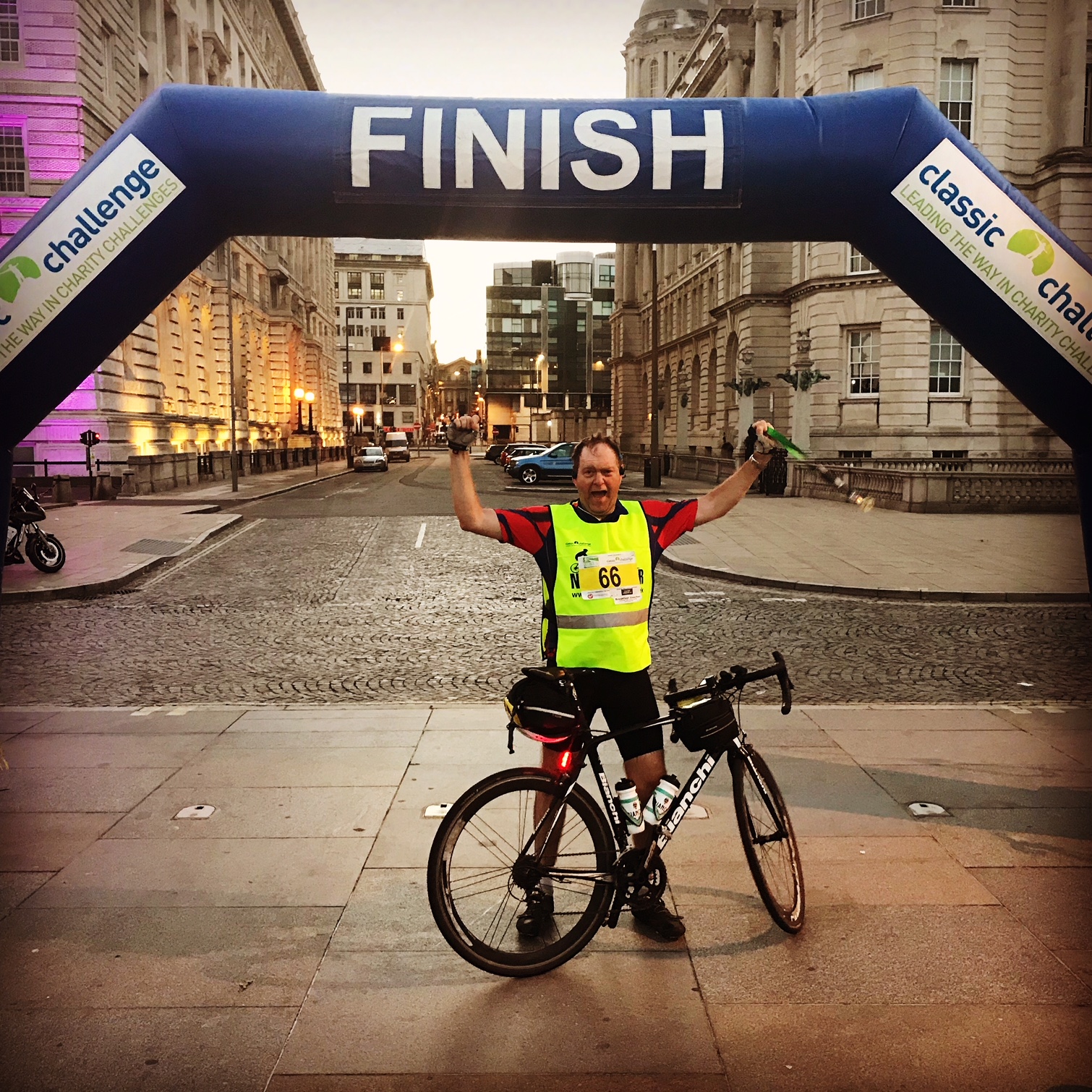 Not even a broken bike could stop a determined Hampshire fundraiser from completing a 100km overnight cycle ride in an effort to help find a cure for dementia. David Hall, 55, conquered the Liverpool Nightrider to raise funds for the Dementia Revolution, a historic joint campaign from Alzheimer’s Society and Alzheimer’s Research UK – and he’s already planning his next event for the cause.

The gruelling event saw the father-of-two from Chilbolton near Stockbridge set off at 10.30pm on Saturday 14 July and ride through the night, cycling through The Wirral and Liverpool City Centre. But it wasn’t just the darkness that made the event challenging for David, he also had to complete the whole ride with only two gears – down from his usual 22 – due to a problem with his bike. Despite this, he persevered and crossed the finish line around 4.30am.

David, Director of Future Generation Banking at Virgin Money, used the event to raise funds to help power groundbreaking dementia research in the hope of finding a cure – after witnessing the effects of the condition his whole life. He was also supported on the night by a childhood friend who has first-hand experience of dementia, after her father lived with the condition for a number of years before his death earlier this year.

So far, he has raised almost £1,200 for the Dementia Revolution. Alzheimer’s Society and Alzheimer’s Research UK have joined forces for this special one-year campaign, as the Charity of the Year for Virgin Money and the 2019 Virgin Money London Marathon. David had initially set out to raise £500, but he’s now hoping to hit £1,500 by taking on more challenges. He is currently gearing up for a 111km cycle event through the trenches in Flanders, which will take place on August 26. You can help him reach this goal by supporting him at https://virginmoneygiving.com/DavidHall20

David said: “It was fantastic event, there was a real buzz on the night and great camaraderie. There would be people you didn’t know at the start, but along the way you’d get to hear why they were doing the challenge and you’d be supporting each other to the end. The ride itself was made harder by my bike breaking before I even started – the hills were particularly hard with only two gears! But I kept going and still came in on time.”

Speaking about the cause, he added: “When I heard the story behind the Dementia Revolution, I knew I had to do my bit to make a difference. The fact that there is currently no cure or even a treatment to slow down dementia is just wrong. I’ve been affected indirectly by the condition my entire life. When I was a teenager, I saw first-hand the impact of dementia through my grandparents. It got to a point where they didn’t even know my name and couldn’t recognise their own children. And more recently, I’ve seen friends of my parents lose the power of their memories. “What made this even more poignant on the night was being supported by my childhood friend Annette, whose dad had dementia and had recently died. I knew him really well when I was growing up and it was very sad to hear. This is why we must do everything we can to alleviate the level of devastation dementia causes and that’s why I’m supporting the Dementia Revolution.”

Jennifer Payne, Corporate Partnerships Officer at Alzheimer’s Research UK, said: “A huge well done to David for completing his mammoth challenge! It’s already a very tough cycle ride, let alone with only two gears! But we’re so grateful for David’s efforts. There are currently 850,000 people in the UK living with dementia, but no treatments to slow, stop or prevent it. Through the Dementia Revolution and with the support of people like David, we will be able to power the groundbreaking research that will transform lives.”