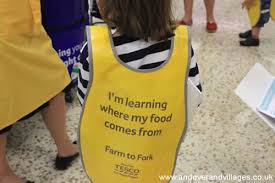 Tesco Andover hosted Farm to Fork for another local primary school this week. This time was the turn of Amport C of E Primary School, a staggering amount of children came along with an army of teachers and helpers.

Tesco Farm to Fork initiative is in place to educate children on where their food comes from and how it is brought to store, giving the children the opportunity to watch butchers, bakers, fishmongers and more work with food and produce.

Andover & Villages spent time with the children in the produce department where the Tesco Community Support Team split the children into groups and asked them to find different coloured vegetables, as Sheryl Scott-Clarke told the children, “Mother Nature is very kind to us, she gives us clues about what to eat.”

The children busily worked through the produce department to find fruits and vegetables that matched their given colour and brought them back. On their return Debby Jones went through the colours with the children one by one, and encouraged them to try some of the tasty fruits on offer. There were strawberries, grapes and oranges and then one young chap said he liked to eat fresh lemon, so the team chopped one up and offered them around. There were lots of brave, smiley faces, but Andover & Villages isn’t convinced it was tasty!

The last colour Sheryl looked at was Bananas, asking the children if they thought bananas were a vegetable, a fruit or a berry. The children decided it was a fruit, but Sheryl told them it was in fact a berry because it grew in bunches on a tree. There are over 3,000 types of bananas in the world, but Tesco only use one, called the Cavendish; this one is used because it is hardy, disease free and travels well.

The children discussed with Sheryl where they thought bananas come from and the very clever Johnny guessed Costa Rica.

The children then discovered that the bananas are ‘put to bed’ on their long journey to the UK, which is why they aren’t all ripened and black by the time they arrive. They are kept cool in the boat and completely dark, which keeps them fresh.

The Farm to Fork initiative from Tesco really is a great, free resource open to the local schools in the area. All you have to do is sign up!